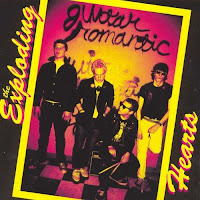 There are three things about CD reviews that I dislike. The first is an overabundant use of the second person. Second is when the reviewer goes overboard comparing an artist’s sound to another artist. The third is when an attempt is made to connect the record to some sort of unrelated larger social context.

I just needed to get that out there.

Okay, so let’s say you go into the record store and you come across this record, The Exploding Hearts, Guitar Romantic. You know nothing about the band, and there’s no date on the packaging. The cover features a skewed photo of the group standing in front of a spray painted title. It has a yellow border and the name of the band around it. From the way the band looks, and the aesthetic of the packaging, it’s concievable that you might believe you’d found a reissue of an obscure late ‘70s new wave punk album.

And though it was actually recorded in 2002 and released this year, were you to buy and listen to the album, nothing would spoil that notion. It’s all uptempo guitars, bratty vocals, popping drums and short songs straight out of the british punk movement. The obvious reference point is The Jam, especially in the vocals, but also in the pop sensibility that pervades. Or, if you’re feeling more modern, they’re a lot like Green Day, but perhaps with a little more heart and a little less angst. They also by turns recall The Ramones with an added dash of the J.Geils Band and Elvis Costello and the Attractions circa This Year’s Model.

No matter the influences, these are songs that are tough enough to make you feel rebellious and accessible enough to sing in the shower. The band has managed to effectively tap into the zeitgeist, i.e. the neverending trend of being nostalgic for recent times past, without coming off as a sad retro tribute. If you have any sort of fondness for the late '70s and early '80s, then buy this and let it be the soundtrack to the movie they should have made about your crazy high school days.

A Sad Note: I didn’t want to make this a focus of the review, but in July of this year, three of the four members of this band died in a van rollover. R.I.P.