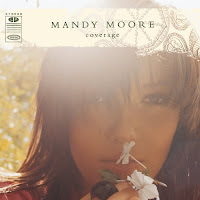 It seems an odd choice for my first review, an all-covers album by a minor player in the blonde teen pop invasion of 1999. But take a look at some of the artists Miss Moore covers: Elton John, Todd Rundgren, Joe Jackson, Joni Mitchell, and XTC! There was no way I could pass up a list like that, even if the CD only ended up as a dusty curiosity in my collection.

Besides, isn't this every rock nerd's dream…a hot girl with cool taste in music?

Mandy didn't just choose her songs well, she also surrounds herself with good company. Scanning the liner notes we see that the songs feature contributions from Evan Dando, both Rembrandts, Dan Wilson (of Semisonic) and Andy Sturmer (of Jellyfish). The background vocals by the latter two on Can We Still Be Friends are awesome.

The arrangements are good, the players excellent, and the sequencing perfect, but I do have one quibble. While I like her artist selection, I think some of the song choices were too obvious, especially One Way Or Another, I Feel The Earth Move and Senses Working Overtime. While I'm thrilled to hear any XTC covered, this is not anywhere close to their best song, and so many others would have suited her voice better (maybe The Disappointed, or This World Over).

That said, there are two songs on here that I didn't know, but now love. The Whole Of The Moon, originally by The Waterboys, and Drop The Pilot, originally by Joan Armatrading. So if this album is exposing even me to new stuff, imagine the potential to open the minds of thousands of teeny-bopper fans…

Though many critics have dismissed this record as little more than karaoke, they forget that karaoke can be so much fun!

Rating: A-
Fave Song: Can We Still Be Friends