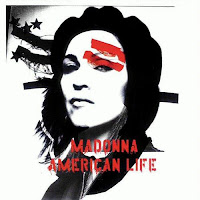 It was kind of sad seeing Madonna in her Gap commercial earlier this fall. Not because she sold out (some artists are just sold out from the beginning), but because she was singing the lyrics to a new song, Hollywood, set to the music from an old one, Into The Groove. It was sad because it seemed to say that her new work just couldn't stand on its own.

I hate to be disappointed by artists I really like, but it's usually inevitable. Very few have a flawless catalog. Still, with your favorites, even if the album doesn't meet expectations, there's usually at least one transcendent moment that reminds you of why you love them so much. Yes Madonna has a few subpar albums, including Erotica, Bedtime Story, and Music, but each one of these had at least one classic song: Rain, Take A Bow, and What It Feels Like For A Girl.

When American Life came out this past spring, I listened to it a couple of times and put it on the shelf because, surprisingly, nothing hooked me in. But most records deserve a second chance...sometimes, depending on what's going on in your life, or the time of year, you just aren't ready. This has happened to me several times, most notably with Weezer's Pinkerton and more recently with Counting Crows' Hard Candy. So I decided to give Madonna a second chance.

I'm still not feelin' it.

My favorite Madonna album is Ray Of Light . The great thing about that album is that it still has Madonna's gift for pop intact, but adds lyrical depth. On American Life, the lyrics are introspective, but she seems to have forgotten the importance of melodies. At so many places, she subverts her pop sound just when she seems to have something going, "rapping" on the title track and repeating "fuck it," distorting her voice to sound like a man's on Hollywood, and letting her voice be ripped apart in I'm So Stupid.

It gets a little calmer from there, but probably too calm. X-Static Process could be a lullaby. Easy Ride wouldn't have been out of place on Ray Of Light, but it probably wouldn't have made the final cut. The only truly interesting song is Mother & Father, which sounds like Blondie and addresses Madonna's well known parental issues. Still, despite some really cool parts, the song just doesn't hold itself together.

In conclusion, the second worst criticism I can level at an album is that it's boring. The worst criticism is to say that I can't even find one song that I'd put on a mix CD. Such is the sad case here.