May 24, 2019
REO Speedwagon got its start in the late 1960s on the campus of the University of Illinois in Champaign/Urbana. The band grew out of a friendship between a students Neal Doughty (piano/keyboard) and Alan Gratzer (drums). Joining up with a couple of other musicians, they took the name R.E.O. Speedwagon. It wasn't long before they started getting gigs at parties and bars, doing covers of the hits of the day.

The band cycled through several players in its first three years, with Gratzer and Doughty as the only constants. One-by-one they added the members that would form the first "official" lineup: singer Terry Luttrell in early 1968, bassist Gregg Philbin later that summer, and guitarist Gary Richrath at the end of 1970. Richrath was a native of Peoria, 90 miles northwest of Champaign, and had essentially stalked the band until they let him join.

It was a good move, as he not only an accomplished guitarist, but also a songwriter. With Richrath the band ascended to the next level of local popularity, so much so that they got the attention of songwriter and producer Paul Leka (co-writer of the Lemon Pipers's hit "Green Tambourine"). the band made some demos with him, and on the strength of those got a contract with Epic Records. REO recorded their debut album in Leka's Bridgeport, Connecticut studio.

The band's initial sound was a bit difficult to classify, with elements of blues, rock, and country. Stephen Thomas Erlewine calls it "boogie woogie." If a band came along now with this sound we'd call it blues revival. In the context of the times they were likely taking cues from Lynyrd Skynyd, the Animals, the Rolling Stones, and the Allman Brothers Band. Lutrell had a rough-hewn, soulful voice that fit this sound perfectly. 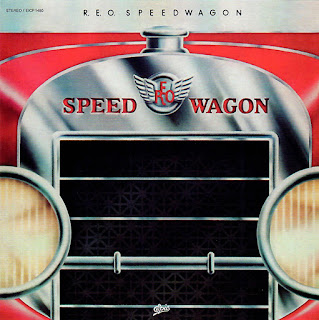 Their first album, self-titled, was released in October 1971.

Opener "Gypsy Woman's Passion" is hard and fast, with lots of space for Richrath's fiery guitar. The lyrics are barely above nonsense, clearly there for feeling more than meaning.

"157 Riverside Avenue" celebrates the Westport, Connecticut address where the band stayed while recording the album, and offers a brief window on what they were feeling, "So cold, so rainy, we couldn't help feelin' blue / Not enough time, too many things to do. / So we just sat back and played some." Heavy on Doughty's jumpy piano, the song would evolve in subsequent years into a jammy showcase for each of the band's players.

Doughty's piano also drives "Anti-Establishment Man," a protest song addressed to a generic politician. Most pointedly, the tune's lyrics condemn the Vietnam War: "I'm tired of your treating / All of my children the same / Everywhere! / Spending all that money / On a stupid war in Vietnam / (When we need it at home)."

"Lay Me Down" has a misleadingly sexy title. In actuality, Luttrell is begging his woman to leave him. Richrath's guitar darts in and out of the vocals, and Doughty switches to organ to lend a soulful edge to the tune's chorus, along with some actual soul singers, a small choir of voices dubbed teh "Freedom Soul Singers."

"Sophisticated Lady" - no relation to the Duke Ellington song of the same name -
proved a very minor hit. Like "Gypsy Woman's Passion" it's fast and loose. It sounds like it could have been a mid-1960s Stax single, at least until the guitar, bass, and organ solos in the song's middle section.

"Five Men Were Killed Today" is a protest ballad in which the the band sings together in harmony, over a slide guitar. It's hard not to think that it owes an obvious conceptual debt to Crosby, Stills, Nash, and Young's "Ohio," which had come out just as the band were recording this album. Though unlike that song the brief lyrics don't mention any single event, and instead may be just generally about the futility of war: "Five men were killed today, / leaving five wives as widows. / Six men they tried to kill. / Maybe one will live to raise his son." 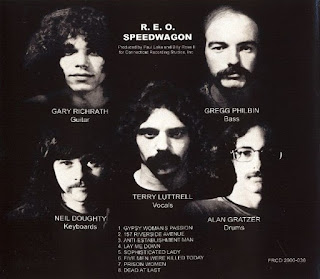 "Prison Women" is a short little number with the odd lyrics. Like "Gypsy Women's Passion" they seem made up on the spot. The repeated chorus goes, "There's an object of the story, don't mess with the prison women." Seems like good advice, but have you ever heard a moral described as "an object of the story"? Me neither.

Album closer "Dead at Last" stretches out ten minutes long, though it only has 50 words in its lyrics. It's told from the perspective of a dead person who views the afterlife as freedom. There are multiple movements, drum, organ, guitar, and flute (!) solos, and the return of the Freedom Soul Singers (singing only the word "freedom" over and over again, appropriately). The's a guitar flourish and then an explosion.

All of these songs are credited to the entire band, though by other reports Richrath was the main songwriting force. That fact was at least in part what led to this being the only record the band would make with Terry Luttrell. His departure in early 1972 would be chalked up to that old favorite, interband friction. Though specifics vary in different accounts, it's generally agreed that he didn't like the lyrical direction of Richrath's songs, be they about love or politics. "It was one of those moments in time where I didn't want to sing Gary's love songs to his girlfriend. I was more into environmental change and things that were going on than what was going on in the band," Luttrell said somewhat cryptically in a 2013 interview with the Quad City Times.

Perhaps if R.E.O. Speedwagon had been a sales smash Luttrell and Richrath would have had motivation to work it out, but as it was, the album sunk. Luttrell went on to front the band Starcastle for a few years. REO would have to find a new singer for their second album.

Burning Question
Where did the band's name come from?
The moniker came from a 1915 truck model Doughty had learned about in a class on the history of transportation, the REO Speed Wagon. The three letters were the initials of its creator, Ransom Eli Olds, whose more famous car was the Oldsmobile, but it was pronounced as a word "rio." The band reversed this.