May 31, 2019
Where we left off:
REO Speedwagon's first album was not a hit, and they were down one lead singer after Terry Luttrell's departure from the band.

In search of a new lead singer, REO guitarist Gary Richrath answered an ad for a "Musician Referral Service." Accounts differ on whether he saw the ad in a newspaper or a guitar shop, but either way it was really just a ruse concocted by a 20-year-old singer / songwriter named Kevin Cronin. Cronin was a native of the Chicago suburb Oak Lawn who was looking for a band to join and devised the referral service as a way to appear more accomplished than he actually was. When he got the call from the REO guys, he said he'd give them his best singer. "Who's that," they asked? "Well, it's me," Cronin replied.

That REO was taken in by this bit of subterfuge shows just how DIY they were in those early days, despite being signed to a major label and having a manager (fellow University of Illinois alum Irv Azoff). But once they heard Cronin sing and play, and learned that he wrote as well, they decided to give him a chance.

It wasn't long before the band were back in a recording studio. Once again working with producer Paul Leka, they headed to Nashville in the summer of 1972 to make their second record. The result was the curiously named R.E.O./T.W.O., released December of 1972. 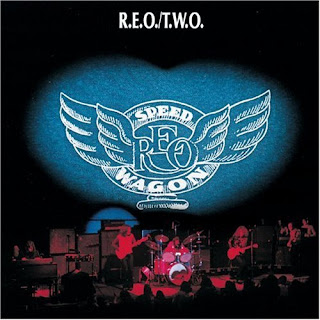 Cronin's presence is felt immediately in melodic album opener "Let Me Ride," one of three songs he composed on the record. That said, Cronin didn't exactly revolutionize the band's sound. "Let Me Ride" is six minutes long with plenty of space for the band's trademark instrumental breakdowns. And while Cronin's vocal are vastly different from Luttrell's, being both brighter and smoother, he employs a growly southern tenor on most of the record's songs.

On his second song on the record, side one closer "Being Kind (Can Hurt Sometimes)," Cronin's voice is almost unrecognizable. The song has a proggy, ponderous feel to it. People tend to criticize 1980s production as being dated, but this sort of thick, hazy tune couldn't have come from any other era than the 1970s.

Cronin's final offering is an autobiographical statement of purpose called "Music Man." In the song's lyrics Kevin explains how he's not suited for any other job than being a musician, and how his parents fear for his future because of it. As a display of Cronin's single-minded determination, it would end up being prescient, which is probably why it still survives in the band's latter day setlists.

Gary Richrath has has his own counterpart to "Music Man" called "How the Story Goes." Like a lot of Richrath's lyrics on these first two albums, they're full of imagery but somewhat impenetrable meaning-wise. What does come through, though, is that at this point Richrath felt he'd achieved two dreams: "playin' music in a band" and being "happy with the woman I love." And that he'd done so perhaps against the odds.

He's got romance on his mind on "Like You Do" and "Flash Tan Queen" The former takes a somewhat sordid tour through different iterations of love and sex, all with the purpose of telling a woman she's something special. The song is a guitar showcase featuring multiple riffs, solos, and even a classical breakdown. There's also a strong drum performance from Gratzer. Of all the songs on this record, this is the one where Cronin sounds most like you'd expect him to, that gulping, vowel-elongating style that would later become famous. "Flash Tan Queen," meanwhile, is a countryish ode to a prostitute. 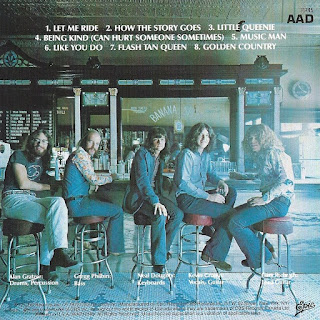 REO Speedwagon's debut album displayed a bit of a social conscience on songs "Anti Establishment Man" and "Five Men Were Killed Today." Closer "Golden Country" revisits that, discussing sexual violence, economic injustice, war-mongering, and racial inequality. The song begins by a heavy, menacing guitar riff that matches the mood of the subject matter, and it ends with a wild guitar solo.

The album also includes a bluesy, jammy cover or Chuck Berry's 1958 hit "Little Queenie," featuring saxophone by "Yakity Sax" hitmaker Boots Randolph. This tune was also in the live repertoire of both the Beatles and the Rolling Stones, and is a nod to the fact that REO got their start as a cover band doing songs by those bands as well as the Doors, Jimi Hendrix, and the Kinks.

As with the debut, R.E.O. / T.W.O. did not sell particularly well, failing to crack the Billboard 200 (though it did go gold following the band's commercial breakthrough in the early 1980s). But the band was able to tour nationally for the first time, largely as an opener for bands such as the Eagles (who had formed in 1971), starting to build a reputation as a killer live act.

Burning Question:
What does the T.W.O. stand for?
This is the kind of thing that sticks in my craw, so it was much to my chagrin that I couldn't find a definitive answer. It's not a common acronym, though it could stand for "technical work order," "the weather outlook," "truth wins out," "taking what's ours," "the wild ones," or really anything else you might think of. I'm inclined to conclude that it's not really an acronym at all but instead a just a semi-clever parallel of R.E.O. That's probably why the official title pairs them together the way it does.