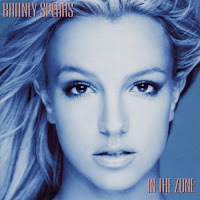 "I'd rather see you bare your soul," special guest Madonna tells Britney Spears on Me Against The Music, the first song on In The Zone. What follows on the next 11 songs is nothing of the sort, and I wonder if that isn't for the best.

It takes a special artist to inject the personal into pop. Madonna has done it, but not with complete success. Michael Jackson's attempts (perhaps understandably) have consistently failed. Recently, Christina Aguilara made the jump.

But Britney has wisely realized that now is not the time. So instead of lyrics about her break-up with Justin, or the trappings of celebrity, we get the club jams, love songs, and come-ons that are the bread and butter of dance pop.

The album starts off shaky; even though Me Against The Music hits some melodic and rhythmic highs, both it and (I've Got That) Boom Boom feature more self-reference than your average Jay-Z song. Maybe it's just me, but I don't like anything that makes my pop music less universal. But, from there on, the album is nothing but pure pop, with Britney changing styles like shoes.

Breathe On Me is Britney doing her best Kylie Minogue...the similarities are so uncanny that it must have been intentional. Shadow shows that, like Avril Lavigne, Britney can also "write her own songs" as long as The Matrix are there to help. The Touch Of My Hand is where Britney goes all DiVinyls on us. The song will join an ever growing canon of self-gratification songs (She Bop, by Cyndi Lauper, You're My Best Friend by Queen, Pictures of Lily by The Who, Oops (Oh My) by Tweet, etc.).

The only song I could really do without is the dancehall-flavaed The Hook Up, but everything else is the guilty pleasure we've come to expect. I especially like Early Mornin' a collaboration with Moby that is more subtle than anything Britney's done thus far. Brave New Girl could signal Britney's future. It's got an experimental structure, a great chorus, and manages to sound both old and new at the same time.

Despite the relative artistic success of this album, the biggest mystery remains: Why can't such a photogenic girl have one good album cover? This is the fourth stinker in as many tries. Anyway, the final verdict is that if you like Britney there's nothing here that will change your mind. The same applies if you don't like her.