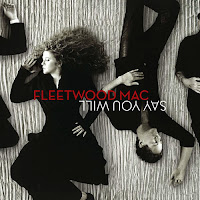 There are two things I'll continue to mourn about the passing of vinyl as the dominant format for music releases. One is the packaging (I think because the space to fill was so big, artists used to put a lot more thought and effort into it). The second thing is length. While, due to capacity issues, LPs couldn't be too long without spilling into double sets, CDs have 78 or so minutes. So in this CD age, some artists feel it is necessary to use every one of those minutes, like Fleetwood Mac.

Their return album has 18 songs (the shortest ones just under 4 minutes), seemingly under the supposition that more is better. Of course that's not the case, but before I quibble let's just take a moment to celebrate the fact that this record even exists, given the band's turbulent history. It's amazing that they are even alive and speaking to one another, let alone producing vital music.

The band has gone through several permutations, and this latest version is sadly without Christine McVie, who was my favorite songwriter in the band (Say You Love Me, Little Lies, and Everywhere are all hers). For that reason alone, I almost avoided this album, but I'm glad I didn't. While the album would definitely have benefited from her presence (though with another songwriter it would have had to have been a two CD set), it doesn't sink without her.

That's because there's A LOT of great stuff here. What's The World Coming To, Thrown Down, Say You Will, and Peacekeeper all deserve to be on a future Fleetwood Mac compilation, and at least four other songs can stand alongside anything else they've done.

Even so, there's too much here. Of course, one advantage CDs have over vinyl is that it's so simple to skip songs you don't like. But, I suppose I'm old fashioned in that I like to listen to an album as an experience. I don't want to have to skip songs. In that spirit, there's my shot at a 13 track version of the album:
1. What's The World Coming To
2. Illume 9-11
3. Thrown Down
4. Miranda
5. Say You Will
6. Peacekeeper
7. Smile At You
8. Running Through The Garden
9. Steal Your Heart Away
10. Bleed To Love Her
11. Everybody Finds Out
12. Destiny Rules
13. Say Goodbye

This is not to say that the 5 songs I dumped have no merit. They all have something interesting or cool going on, but they could have easily been saved for B-Sides. A leaner, meaner version of the album might have swiftly been declared a masterpiece. As it stands, we have to settle for a better-than-it-should-be return from a great band.

Rating: B
Fave Song: Thrown Down

P.S. Do any of my fellow English majors also think that Running Through The Garden is based on Rappaccini's Daughter by Nathanial Hawthone?