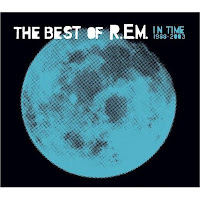 It's fitting that there's a moon on the cover of this compilation. Of course it references the hit Man In The Moon, which guitarist Peter Buck calls the "quintessential" R.E.M. song. But it also stands as a symbol of how circular their career has been. When the band started, they were critically beloved, and had a small-but-devoted fanbase. Then suddenly a string of four albums (Document No.5, Green, Out Of Time, and Automatic For The People) produced huge hits, and everybody learned their name.

But really, since 1991 the band has had only minor hits and their fanbase is probably now only slightly bigger than when they started. The follow-up to their masterpiece Automatic For The People was called Monster and tried for a hard-rock sound. It was the first album I bought by them, so it's really amazing that I like them as much as I do. My favorite album by them is 1997's New Adventures In Hi-Fi. The last two albums, Up and Reveal have disappointed me somewhat, but R.E.M. have continued to make challenging, singable music.

In Time covers half of the circular journey. We start at the near-peak (1988 - 1991), and then slowly cycle down to the present. There are four major hits, five minor hits, a few assorted album tracks or small singles, two soundtrack songs, and two new songs. Despite the title, the songs are not presented chronologically. Even considering my rules, I am really not too bothered by this, because I can tell there was thought put into the sequencing (for example Daysleeper and Imitation Of Life sound awesome put next to one another, and even cause one to rethink the traditional view that the band has lost a few steps).

Being a pretty big fan, you'd think I'd have at least one or two major quibbles about tracklisting, but there's no song here that doesn't deserve to be. Sure, it would have been nice to see Get Up, Drive, or Bittersweet Me (and Shiny Happy People needs more props), but it's not a huge deal.

The two new songs fit in well. Bad Day was written quite awhile ago and sounds like it. Animal indicates that they might be heading back in their Monster direction. But the real treat here is the inclusion of The Great Beyond. It means I can get rid of the boring Man In The Moon soundtrack and enjoy this treasure of a song in a proper context. I think it's one of the best things they've done.

So, the real question is why did I buy this? I had 16 of the 18 songs, and I could have downloaded the new ones fairly easily. I can't really answer, but only can say that decisions made in the search for the perfect best of compilation don't always make logical sense. This isn't it exactly what I'm looking for, but it ranks up there with the best.

Rating: A
Fave Song: The Great Beyond