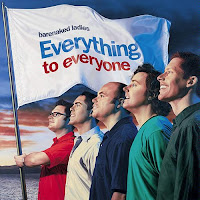 "Would anybody hear me/if I shed the irony?" Ed Robertson asks halfway through BNL's sixth album and it's a good question. To the casual observer it may seem that BNL have just started to struggle against their goofy image, which they first acquired back in the early '90s with If I Had a Million Dollars, and was galvanized by the smash One Week.

But it's been going on much longer than that. Their second album, Maybe I Should Drive, was not exactly what fans of Be My Yoko Ono were expecting. There were funny/clever songs like Alternative Girlfriend and A, but there was also seriousness creeping in on a song like You Will Be Waiting. Their next big hit, The Old Apartment, seemed funny but was really about desperate nostalgia. If I Fall and Break Your Heart were also straight out affecting. And so it has continued through their massive success (Stunt) and follow-up (Maroon) with the serious songs beginning to outnumber the funny ones.

When I saw them in concert in 2001, it was the only time I've ever really wished to be a rock and roll star, and felt it could have actually been possible. They had a combination of nerdiness and coolness, seriousness and humor that I feel is present in almost all of us, and that too many bands ignore.

This record continues their balancing act. On one hand we've got their stupidest song yet, Another Postcard, which is all about receiving postcards with pictures of monkeys on them. Maybe it was inspired by true events, but given the literal minds of some of their fans (who throw Mac and Cheese and boxer shorts on stage because of certain lyrics), it just seems to be asking for trouble. It also seems like a song that never needed to be written. On the other end of the spectrum there's War On Drugs, a completely bracing look at unhappiness and self-destruction.

The rest of the songs fall somewhere in between. Shopping is an '80s new wave homage that could be ironic or not. For You is countryish and thoughtful. At first, Unfinished seems like the most disposable song on the album and then it breaks into a full out Beach Boys tribute. In fact, there's no song here I would get rid of, even Another Postcard, because we know that to BNL, the coexistence of the stupid and the sublime is the most important thing.

Rating: B+
Fave Song: Take It Outside

Note: The edition I bought has three acoustic versions of different album tracks tacked on. I could live without them.