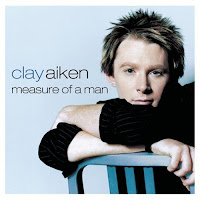 Just when you thought that teen pop was a phase we'd grown out of, with Britney smooching Madonna, JT lovin' McDonalds urban style, and Nick Carter reduced to being a celebrity judge on The Wade Robson Project, along comes Clay Aiken.

Now Clay isn't a teen, and he doesn't have the facelessness we first associated with the teen pop sound in the halcyon days of the late '90s, so it's strange that his sound would go in that direction. And yet, the first song on his new album is co-written by Andreas Carlsson, the man who (as part of Max Martin's Swedish songwriting factory) co-wrote songs for Britney, N*Sync, and Backstreet Boys (including I Want It That Way, perhaps the definitive pop song).

That first song, Invisible, is also the first single, and check out these lyrics: "If I was invisible / then I could just watch you in your room/If I was invisible/I'd make you mine tonight." Sure, it's a little date-rapey, but not since Every Breath You Take has a stalker song been put to such an irresistable sound. It's got the same sensitive acoustic guitar, big drums, and soaring verses and choruses that we came to expect from the Backstreet Boys, especially on their later work (it seems funny to write that). In fact, most of the songs on the album follow this formula closely.

But I'm not hating on it. I have every Backstreet Boys album, and really see them as a continuation of a mainstream pop sound that's existed since rock 'n' roll was born. You know, lyrically lightweight, but impossibly catchy, and impeccably produced. In the '70s ABBA and The Carpenters were considered completely square, but now they get all sorts of props. The same thing should happen for Def Leppard and Chicago. So I don't hate the sound, I just question why Clay didn't decide to move forward.

There are only three songs that really try to do that. When You Say You Love Me is bouncy and a little bit country and slightly adult-sounding. Clay's best American Idol moment, many will agree, was the audition where he sang Elton John's Don't Let The Sun Go Down On Me. We get a small glimpse here of what might have happened had he decided to use Elton as his prototype instead of Brian Littrell…No More Sad Songs and Perfect Day both start with pianos, and burst into Elton-style BIG choruses, and just aren't as robotic as everything else. It would have been cool to hear a whole album of these.

Still, though it's unadventurous and somewhat antiquated, this is a straight up pop album. And though you will love to sing along, you won't feel cool listening to it. But, I suppose if you're that worried about appearing cool, you wouldn't even think about buying this. If that's the problem, maybe you could ask your mom to get it for you for Christmas.

P.S. Even something cheesy like Second Best would have been a better title than Measure Of A Man, which seems like a rejected Van Halen album title.