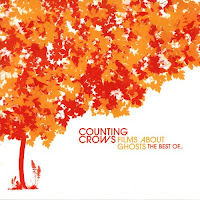 It's weird seeing all of these '90s artists anthologized. In recent weeks we've seen best ofs from Sheryl Crow, Red Hot Chili Peppers, No Doubt, and Tori Amos. Of course, groups like Toad The Wet Sprocket, Nirvana, and Smashing Pumpkins already have compilations, and we're still waiting on best ofs from Oasis, Dave Matthews Band, and Pearl Jam, so it shouldn't really bother me. And yet…

I guess it's part of getting older, but seeing career retrospectives from artists whose first songs I clearly remember encountering creates a wonky feeling. It's like, how did so much time pass so quickly, and what have I been doing with it? Was that really eight years ago that a guy in my dorm declared his everlasting love for Gwen Stefani, and we all said: "Who?"

But it's also a proud feeling, because now there's proof that my generation has produced some genuinely lasting, respectable musical artists. Maybe it's the fatalist in me, but I always have a sense of impermanence when a new artist hits the mainstream. Our pop culture is so disposable that it's nearly impossible to tell who is Sarah McLachlan and who is Jann Arden. For example, I absolutely loved the Counting Crows when I first heard them. This was when I wasn't very much into music, but I bought August And Everything After, and was obsessed with it! Did I expect anything of them beyond that one great record? No.

Even so, I dutifully bought their second album, Recovering The Satellites, and found it entertaining but not engaging, and I pretty much forgot about the band. If I made a list of artists whose next album I would definitely buy, they wouldn't have been on it. They'd have to impress me again to get my interest back. In 2000, I saw the video for Hangingaround, and liked it. I held out a bit, but eventually caved and bought This Desert Life. My reaction to it was identical to the previous one. A pattern was forming.

So, Hard Candy came out last year and I was determined to break the pattern. I willfully ignored the album, though whenever American Girls came on the radio I turned it up a little. Then radio played Miami to death and once again, I was won over. But this time, the album clawed its way into my top 10 for the year.

So here comes Films About Ghosts (great title), with two new songs, a rarity, and non-chronological sequencing. These are all no-nos according to my best of rules, and yet I'll be damned if this isn't one of the most enjoyable compilations I've heard in awhile. Witness: I have no quibbles about the tracklisting, (okay, I miss Daylight Fading and Miami, but am happy to have the version of Big Yellow Taxi with Vanessa Carlton on background vocals); the flow is seamless; the new songs are good; and the overall effect is that I realize just how much I like this band.

And really, that's the noblest of deeds for a best of. Even if it makes me feel old, it's great to see a band I like painted in such a flattering light. Maybe a lot of people (including me) haven't been paying as much attention as they should, but one thing you can say about Counting Crows and this best of: They keep reminding you that they're here. In this modern disposable age, it seems that's the only way to become great.

Note on the song Einstein On The Beach (For An Eggman): This song has been causing me minor irritation for four years. Local radio stations have been playing it since I moved here and I always loved it but was too lazy or forgetful to research what it was…I assumed it was from a soundtrack. Turns out it's a very early demo that some stations picked up after the group hit big. It's nice to have that mystery solved.