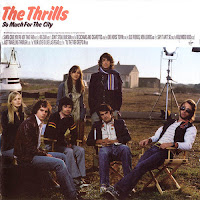 Despite their name, The Thrills are not part of the "the garage band" trend started by The Strokes and The White Stripes (and followed by The Vines, The Libertines, The Hives, etc.). They are from Dublin Ireland, and the only way they might be defined as garage is if you’re referring to the carport on the Wilson brothers boyhood home in Hawthorne California.

Like The Beach Boys, The Thrills take a lot of elements and then make sure that everything is in place and nothing grates the ear. Banjo, harmonica, pedal steel, and organ are all incorporated seamlessly, and harmonies are added everywhere they’ll fit. The lead singer doesn’t have an amazing voice (he sounds somewhat like Wayne Coyne from The Flaming Lips), but it doesn’t matter.

What every review of this album is bound to mention is how the band does not sound Irish at all and how the songs are California-obsessed (L.A., Santa Cruz, San Diego, Big Sur, and Hollywood are all mentioned in various songs). Not since Dre and Pac got together has Cali gotten so much love, but hey, isn’t California the perfect place to romanticize?

What remains to be seen is if on future albums The Thrills can forge an identity completely their own, but for now I’ll love them for being so fun and unassuming, and for creating singalong stompers like One Horse Town and Your Love Is Like Las Vegas. I must also mention that they have added another great song to the ever-expanding Say It Ain’t So pantheon (joining such heavyweights as Weezer, The Outfield, and Hall & Oates).