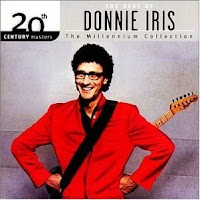 I was going to review the new Eagles compilation, The Very Best Of, but realized that I didn't have much to say beyond praising the prowess of their early singles, griping about the placement of Hotel California, commenting on Don Henley's sometimes retreaded lyrical territory, and giving the album an A-.

Instead, I thought I'd give some space to a guy who hasn't had a millionth of the success of The Eagles. I came across Donnie Iris recently, two times. The first was when I was researching my eighties compilations and the charts listed a minor 1980 hit called Ah Leah! The second mention was a recent Fountains Of Wayne interview in which one of the members joked that they were planning a tour with Donnie. The interviewer went on to explain that Iris was an early '80s nerd-rocker.

Well, this got my attention. All you have to do is put the words nerd and rock together and you've got me. If that seems odd, think about the nerd success rate in pop music: Buddy Holly, Elvis Costello, Weezer, They Might Be Giants, and so on. So I bought this compilation.

Before I go on, just let me explain that these 20th Century Masters The Millennium Collection things are a blessing and a curse. They are put out by MCA Records and usually contain no more than 12 songs, far from the full capacity of the disc. Now there are certain groups, like Head East and ABC, that you don't really need more than 12 songs from, so these collections are good to have. But when you have Marvin Gaye or The Temptations it's just ridiculous to limit yourself to 12 tracks, and definitely not a good deal for the consumer.

Anyway, back to Donnie. I was very surprised to find that I love every one of these 12 songs. But of course I can't just enjoy them without any context.

So it's time for Rock History. I did some research on Donnie, starting with my dad and step-mom, both of whom are really into music and who would have been in their prime in the early '80s. They only had vague recognition. So here's what I found from a combination of the CD liner notes, the Ultimate Band List, and Amazon.com. Donnie is from Pittsburgh, and he had a hit song in 1970 called The Rapper. How Nostradamus is that?! Actually the song is not about an MC, but instead concerns a mack daddy. So, it's still ahead of its time.

In the late '70s he joined a band called Wild Cherry, who'd just had a huge hit called Play That Funky Music. Yes, the white boy song. The band soon broke up and Donnie teamed up with its keyboardist Mark Avsec to write songs. It worked well, so along with the band The Cruisers, they recorded several albums in the early '80s including Back On The Street, King Cool, The High And The Mighty, and Fortune 410.

The music itself is in line with similar new wave sounds of its time, such as Devo and The Police, but also has overtones of mainstream bands like Journey. The most distinctive aspect is the vocals. Donnie's singing voice is somewhat gruff, but the backgrounds and choruses are layered into large choirs of harmonies. The combination of sweet and tough is very appealing, and the production on most of the songs is very detailed. I'm struck that this formula was subsequently taken all the way to the bank by groups like Def Leppard and Chicago. Maybe Donnie Iris is really producer "Mutt" Lange's former identity. Lange, who is Mr.Shania Twain, doesn't like to be photographed, and was played by former nerd Anthony Michael Hall in a VH1 movie about Def Leppard. Food for thought...

Seriously, I don't know much about where Donnie has been lately, but apparently he continued recording into the '90s and plays shows in Pittsburgh, where he's still a draw. How many musicians do you suppose are out there like him, going ignored by rock 'n' roll history, slipping through the cracks? I'd say thousands. I guess that's part of the thrill of being a music fan; discovering quality artists who few have heard of. It's also part of the frustration of being a music fan; that such great pop music could be so easily ignored.

Rating: A
Fave Song: That's The Way Love Ought To Be

Anonymous said…
Donnie is alive and well and still rockin.