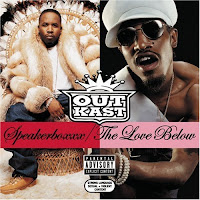 The standard critic line for a double album is as follows: It would have made a brilliant single album. Everybody with the audacity to put out two discs, from the Beatles and Clash to Smashing Pumpkins and Jay-Z has had this criticism leveled at them. (Jay-Z even tried to take the advice last year, putting out the revisionist The Blueprint 2.1, which critics promptly dismissed). But when Outkast released this double album, the line was nowhere in sight. Why?

Well, for one this isn't a double album strictly speaking…it's two solo discs packaged together. But Outkast is also that rare group that can stimulate both the minds of the critics and the bodies of the people. Critics love them because they are so adventurous and different. They have a vision and a style and they are bringing it to us as they see fit. Now fans might love them because of that, but mostly I think it's just because they make awesome singles. One need look no further than 2001's Dre and Big Boi Present... for proof of that.

But should Outkast be exempted from scrutiny just because they are so far ahead of everyone else in hip-hop? It's always good to reward those who take chances, but when you're throwing so many ideas out, there are bound to be some bad ones. So what I'm saying is, these albums are far from flawless.

Speakerboxxx, suprisingly, fares better to my ear. Disregarding skits (which both records are unfortunately overfull on) there are 13 songs here, and 10 of them are pretty killer. Ghettomusik is full of crazyfast rapping, Reset is just plain soulful, and War is a furious protest. The album is a bit top-heavy though, and the end is saved from being a complete drag only by the catchy Flip Flop Rock, featuring Jay-Z.

The Love Below is a bit trickier. Hey Ya! is brilliant, without a doubt, and its uncategorizable nature is pretty typical of the whole album. The sound is a mix of hip-hop, R & B, big band, jazz, and dozens of other genres. Unlike Speakerboxxx, the skits are a bit more obtrusive and the songs a bit more meandering. Almost every song is funny, intentionally or not, especially Roses and Dracula's Wedding (which features the lyric: I wait my whole life to bite the right one / Then you come along and that freaks me out). Most intersting is the spoken piece A Day In The Life of Benjamin Andre (Incomplete) which is an enlightening autobiography that comes long after the album's energy has waned.

So, would I like to say that the best songs from both discs would make a masterpiece of a single disc? Yes, but I won't. We know where that leads. I love Outkast because they do things with music that no one else has even thought of yet, but that doesn't mean they shouldn't edit their output. Nor does it mean that they get a free pass into the top ten. However, number 11 is open.

Rating: B
Fave Song: Hey Ya!