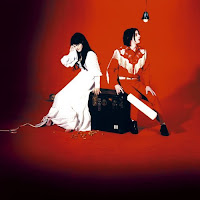 Though they come off as rock 'n' roll minimalists, I believe The White Stripes are actually very shrewd businesspeople. They came to prominence a couple of years ago with an awesome Lego-animated video, a white and red wardrobe, a cockamamie are-they-husband-and-wife-or-brother-and-sister controversy, and no bass player. All were gimmicks designed to get attention, and it worked.

Critics have fallen all over themselves about the band. I think they were on 9 of this year's 12 Spin covers, and the other three months they were on Blender's. And you know it got out of hand when Rolling Stone named Jack White the 17th greatest guitarist of all time (ahead of George Harrison, The Edge, and Eddie Van Halen…please). So let's cut the crap. The most important question is: Does the music live up to the spectacle?

Well, usually, but I don't believe that Elephant is all that and a side of fries. Yes, there are lots of things to love about The White Stripes and this record. For a two instrument band they sure make a righteous noise. Songs like Seven Nation Army and There's No Home For You Here almost match the power and intensity of Led Zeppelin…no small feat. They also don't take themselves too seriously. Well It's True That We Love One Another is a cute goof with guest singer Holly Golightly, and Girl You Have No Faith In Medicine and Ball And Biscuit are rockin' and funny.

But what I like most about them is their soft side. I got into the Stripes last year when radio started playing We're Going To Be Friends, a sweet, gentle, unaffected song from their last album, White Blood Cells. There are a couple of songs like that here, and this is where the band really shines. I Want To Be The Boy Who Warms Your Mother's Heart, besides having an unnecessarily long title, is a simple love song that feels completely genuine and gimmick-free.

There need to be more moments like it. For a record to transcend good for great I need to be able to buy completely into band and what they are putting across. The White Stripes' gimmicks are at times just too distracting for me, their songs too self-aware. As a result, the music is overshadowed. And though it doesn't seem to bother critics who'll call this the best album of the year, that's the deal-breaker for me.

However, if they can come up with an equal number of good songs for their next record, finally drop the brother-sister ruse, and stop wearing red pants, I'll reserve a place for them in the next top 10.

Rating: B-
Fave Song: I Want To Be The Boy To Warm Your Mother's Heart