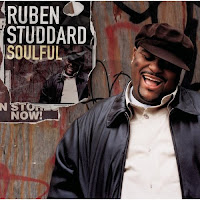 Here's why I believe Ruben's American Idol win was justified, even though Clay Aiken has proved more popular since the show ended: From the first auditions to the final episode, Ruben was was consistently great, seemingly without effort. All of the other contestents had at least one (but usually several) cringe-inducing performances. But Ruben stayed true, and by the end seemed to be competing against nothing but the sense of inevitabilty surrounding him.

So, I hate to say that I'm quite disappointed with his debut album, Soulful. The voice that Ruben showcased on AI was a throwback to traditional soul men like Otis Redding, Marvin Gaye, and Luther Vandross, and perhaps it was too much to expect a similarly old-school album. That sort of thing just doesn't exist in today's R & B; guys like R.Kelly, Musiq and D'Angelo are the closest we've got.

Soulful tries to please both sides, the old school and the new jack, and in the process loses any sense of, well, consistency. In the former style there are mostly covers, by the likes of The Bee Gees, Westlife, and The Carpenters (he covers Superstar, and just to add confusion names one of the originals on the album For All We Know, also the name of a Carpenters hit). These are just okay, but they're the best the album has to offer.

The more modern tracks are useless. Songs like Take The Shot, Play Our Song, and the embarassing What Is Sexy (featuring Fat Joe) are not only forgettable lyrically and musically, but they do nothing to showcase Ruben's voice. Only the opening track, Sorry 2004, demonstrates what might have been. It's got a nice melody and a funny concept (apologizing in advance for an entire year's worth of wrongdoings).

What this album makes me realize (much later than I should) is that American Idol is a flawed concept. Sure, the show is finding talented singers, but so far they've all lacked any sense of artistic vision. To this point, the best AI album is Kelly Clarkson's Thankful (does anyone else think that all of the winners should have to name their album with a -ful adjective?). It's short, catchy, sassy and listenable. Not to say that Kelly had artistic vision, but whoever put her album together did a good job. Whoever did Ruben's was asleep at the wheel, because there's no unified sound and (to quote one of the song titles) no Ruben, aka personality.

So, yes, Ruben's voice deserved to win the competition. There's no doubt about that. Unfortunately, he still needs to find an album full of deserving songs.