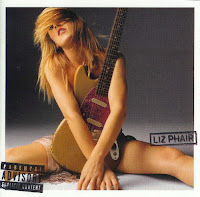 Okay, so she tried to sell out, and it didn't really work. Snobby fans wanted Exile In Guyville all over again, and the buying public really couldn't handle a mainstream radio artist who had a song as explicit as HWC. Always striving for that middle road, I happen to like the album quite a bit.

I believe that it's an artist's perogative to do what they will with their career, and Liz decided that she wanted to try to sell some more records. So she wrote some songs with Avril Lavigne's producers, and came up with a semi-hit that sounds like Complicated (Why Can't I). Critics ignore that the other Matrix collabos are sharp, especially Rock Me and the opener, Extraodinary.

If you don't like the results, fine, but I think an artist wanting to become more commercial is less silly than a fan expecting their favorites to stay the same and not take chances. Besides, there have been much worse "sell-outs" in rock & roll history. The Flame, by Cheap Trick anyone? Liz's personality is all over this record.