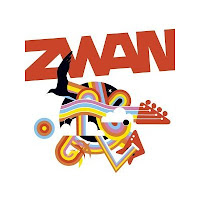 This was the hardest one to omit from my final list. Zwan came to us in January, riding on a white cloud. This was Billy Corgan's chance to start over, without the weighty commercial expectations of The Smashing Pumpkins. The cover was bright, with bubble letters and a rainbow-colored seventies style graphic. There were free stickers included in the CD case. A couple of songs even had exclamation points in the titles!

Despite the mod-goth image they had, the Pumpkins always had a wide-eyed innocent side, witness Today, 1979, or Stand Inside Your Love. It was this kind of music that Zwan focused on and the optimism was evident in the sound of the guitars and the female harmonies on songs like Honestly and Heartsong.

Unfortunately, the record sold poorly, interest in an acoustic side project was minimal, and Zwan broke up this fall. All we have left is one great album to remember them by. It might be the answer to a trick trivia question someday: Name the band Billy Corgan was in before his solo career took off.

Rating: A
Fave Song: Come With Me