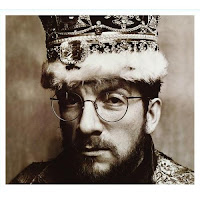 In a competition to determine which album is Elvis Costello's masterpiece there would be several contenders. There's the compact power of This Year's Model, the propulsive maturity of Armed Forces, the underrated brilliance of Trust, and the eloquent bitterness of Imperial Bedroom.

I love all of those records, but for my money, none of them beat King Of America. Released in 1986, the album represented a sort of break for Elvis. He'd gone through a divorce (already well-documented on Imperial Bedroom), and just released his first disappointing album in 9 tries (Goodbye Cruel World). So he grew a beard, put his longtime band The Attractions on hold, and went to America to record this album.

The results really represent where he was at, both literally and figuratively. For one, its sound is firmly in the genre of American blues and country-folk. Elvis has tried many many genres in his career, and I think this one suits him best. Then again, maybe it just suits the content. Just as the political lyrics of Armed Forces were served up with a candy-coating of sweet melody, songs about broken hearts always sound better with an acoustic guitar and a twang.

So songs like Lovable, The Big Light, and Indoor Fireworks all hit the mark perfectly. The latter captures everything that's great about Elvis when he writes about ruined romance: bitterness, sorrow, nostalgia. It's about a doomed couple who are full of sparks and combustion. My favorite line: Everybody loves a happy ending but we don't even try / we go straight past pretending / to the part where everybody loves to cry."

And lyrically, America and Americans come up in several songs. There's the cover of Eisenhower's Blues of course. And the title of the album comes from the opening line of the opening song, Brilliant Mistake (which is one of my very favorite songs to sing to myself). But American Without Tears seems to be the centerpiece, encapsulating the entire concept of the album. It's very autobiographical: "Now I'm in America and running from you."

In a body of work filled with an astonishing number of great songs, I think this album has the most in one place. The only Attractions number, Suit Of Lights, reminds me of a They Might Be Giants song. Poisoned Rose is so good it almost kills me. And Jack Of All Parades may be as close as Elvis will ever get to a Beach Boys tribute and features the classic line "I can't forgive you for things you haven't done yet."

And that's why it wins the match, by technical knock out.