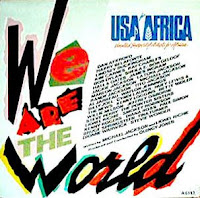 Recorded in 1985, this started the benefit single trend that continues half-heartedly to this day, most notably on the Bono, Gwen Stefani, Mary J. Blige, Michael Stipe and friends collabo What's Going On, done to raise money for AIDS research.

The interesting thing about these benefit singles is that you've got a bunch of filthy rich people who decide to raise money for a cause, not by giving any of theirs away, but by recording something that will entice other (poorer) people to spend their money. Very odd.

Anyway, We Are The World is great fun to listen to for a plethora of reasons. First, it's a very meta song. That is, basically the lyrics are about how the artists have decided to record the song. Kind of mind-blowing, huh?

But what's even more amazing than the star power represented is how many of them are still household names. The requisite '80s folks are there, like Hall & Oates, Cyndi Lauper, Huey Lewis & The News, and Kim Carnes. But these are still fairly respected artists. It's not like Murray Head or Rockwell were on there. The one disadvantage is that two major people are missing: Prince and Madonna. I don't know about the Material Girl, but reportedly Prince was supposed to be on the song and missed the session accidentally. Too bad...it would have been wild to hear him on it.

My favorite thing about the song is trying to sit and identify who is singing what. It's hard, even for someone with a sharp ear. There were almost forty people on the thing, with 20 of them sharing lead vocals and even at a lengthy 7 minutes, no one has much space. And I'll be damned if I can tell the difference between Tito and Marlon Jackson!

Album: We Are The World: U.S.A. For Africa
Favorite Moment: The bridge, where Michael starts it off, "when you're down and out, there seems no hope at all..."