Simon & Garfunkel - "A Simple Desultory Philippic (Or, How I Was Robert McNamera'd Into Submission)" 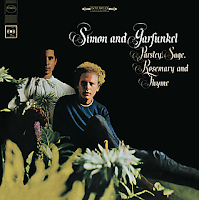 An oddity in the mostly gentle and humor-free ouvre of S & G, this song serves as both great parody and social commentary. The former takes aim at Bob Dylan, who at the time was Paul Simon's chief folk-poet rival (and who would undoubtedly but unfairly receive more serious analysis). So here Simon proves he can do Dylan. The music is organ-tambourine-harmonica driven in the obvious style of Mr.Zimmerman. The title too seems to be a swipe at Dylan's thesaurus-searching style. Translated it means "a random verbal insult."

The lyrics even reference Dylan twice, once condemning someone for confusing Bob Dylan with Dylan Thomas and again in the stolen combo line: "It's alright ma, everybody must get stoned!"

In terms of social commentary, the lyrics turn many of the leading proper nouns of the current youth culture into verbs, including The Beatles, Mick Jagger, Phil Spector, Andy Warhol, Ayn Rand, Lenny Bruce, and even Art Garfunkel. The narrator seems almost put-out to have to pretend to either admire or loathe all of these people. It really hits at the essence of hipsterdom

I must say that though I like this song very much, I like it even more because of where it's placed on the album, right between two great sensitive songs, Flowers Never Bend With The Rainfall and For Emily, Wherever I May Find Her. It really breaks the mood, provides a laugh, and best of all, uses Dylan's own tricks against him! (Dylan fired back by covering The Boxer on his worst album, Self-Portrait.)