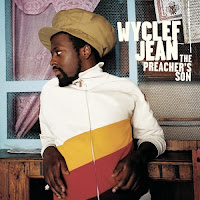 It's interesting that The Fugees were considered a rap group, because really the group was only one-third rapper, and their biggest hit was a faithful cover of an R & B classic (Killing Me Softly) about singer-songwriter Don McLean. When the group broke up, Lauryn Hill went on to make one of the great soul records of the last ten years, and Wyclef immediately scored a folk-rock hit called Gone 'Til November.

So I guess it's fitting that this song is "dedicated to everybody who loves hip-hop music" but isn't actually hip-hop itself. Maybe Wyclef's vocal tone is just too melodic to really ever rap, or maybe it's the catchy choruses (with whoa-oh-ohs), but this is not a rap song.

Amidst paens to fallen rappers such as Biggie, Tupac, and Jam Master Jay, and pleas for beefs (P.Diddy vs. Suge Knight, Jay-Z vs. Nas) to be killed with skillets, is a song calling for unity and revolution in hip-hop and in black culture. Not to mention the fact that it includes a shot at those who would blame hip-hop for some of society's ills: "What we sing is what we see / and what we see is reality."

Notice that phrasing...he says "sing" not "rap." I think it's refreshing that a joint all about hip-hop doesn't have to be hip-hop itself, at least not by traditional definition. Thankfully, along with Missy Elliot and Outkast, Wyclef is helping to expand that defintion. That's what will keep hip-hop alive and thriving more than anything else.

Album: The Preacher's Son (2003)
Fave Moment: The line about wishing there were still four survivors in Destiny's Child.