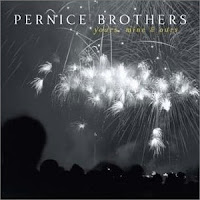 In High Fidelity, John Cusack's character gives his list of best side one, track ones and then gets blasted by Jack Black for playing it too safe. But he lists instant classic songs like Smells Like Teen Spirit and Let's Get It On. The first track of an album is very important. Joe Pernice of Pernice Brothers knows that. The first song on Yours, Mine & Ours is called The Weakest Shade Of Blue, and it's an absolute pop gem that sets the tone for the album to come.

(My side one, track one top 5 is in the Misc. Lists section.)

The album is just over 30 minutes, 10 songs, every one of them a keeper. Joe Pernice's voice is at once familar and engaging, weathered enough to lend gravitas but still light enough to hit those sweet high notes. The music is well-crafted, unobtrusive. Some of the reviews I've read call the lyrics poetry. I can see that, if you think poetry is mysterious and undecipherable lines full of lots of outstanding imagry (I kind of do think that). I have no clue what most of these songs are about, but they all have moments that jump out at you and stick, lines like: "an intense night of fake sleeping," and "it would feel so good to see you cry."

There's one song that I do know what it's about, kind of. It's called Judy, and the narrator mentions watching TV on which "she fills the screen with ruby and emerald green." He goes on to wonder about the "the 'somewhere' in her song." With those two clues and the title I assume it's about The Wizard Of Oz, but other than that I'm lost. The narrator is upset about something, possibly a divorce, and someone is sleeping, and he wants someone to tell someone else to "tell her that you saw me." Good stuff.

Again, it doesn't really matter so much what it all means. At times things seem emotional and troublesome, other times they seem happy, and it's nice to just be along for the ride. Like the lyrics, I don't really know anything about the Pernice Brothers, but I do know that I really like this album, and I read another review that said this isn't even their best one!