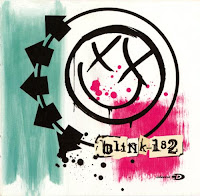 One of the greatest currencies of pop fandom is the ability to say you knew about a band before they hit it big. (Of course, this sort of braggery pretty much annoys everyone, even other pop fans.) Personally, I can lay claim to Third Eye Blind, Jimmy Eat World, The Strokes, and the band whose new album is the subject of this review.

Actually, I owe blink-182 to my junior year roommate, Nick. He was obsessed with their album Dude Ranch, and listened to it at least once a day from September to December 1997, well before they had their 1999 breakthrough. blink was the perfect band for Nick, because they captured the same balance he did, that is, a sensitive soul with a sick sense of humor.

I always demurred a bit from the crude side of things, so a new album that promised the band finally maturing was very welcome. blink-182 is that album, for better or worse. There are absolutely no references to bodily functions, self-pleasure, or how much of a slut your mom is. To fill the space alongside the usual catchy, sensitive songs (of which I Miss You and Always standing out especially) there are some stabs at evolution.

Now evolution is different from growing up. I would say that things like the solemn spoken word intro to The Stockholm Syndrome and the instrumental The Fallen Interlude are attempts at growing up, though they really just end up seeming overly serious. But there's evolution here too. Violence and Feeling This are prime examples of where the band could be headed. They feature shouted, nearly angry verses alternating with nice harmony-laden choruses, and tricky time signature shifts, all of which are hallmarks of the harsher side of punk.

A whole album of that would have been very interesting.

Ultimately, this is the sound of a band getting a little lost in the process of finding its way again. Because of the strange new earnestness, the old-style, the new style, and a Robert Smith guest vocal (on All Of This) that is great but is out of place, the album never seems to find an identity.

I never thought I'd say it, but I might be missing the nasty humor. As much as a song like Dysentery Gary (from EOTS) bothered me, it made me appreciate Going Away To College that much more. I'm confident that blink will regain their balance, and I'll be there when they do. I think they'll soon realize that growing up should never have to mean that fart jokes aren't funny.

Rating: B-
Fave Song: Feeling This