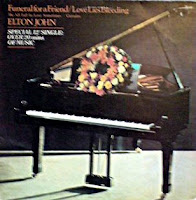 Blowing in like a brisk north wind, this opening song from Elton's 1973 epic Goodbye Yellow Brick Road album is really two songs in one (as the parenthetical title would indicate). The instrumental funeral really does sound mournful, as well as creepy. The first swell of synthesizers forms the basis for the entire Blade Runner and Legend scores (shame on you Vangelis).

About three and a half minutes in, the funeral gets crazy and hyper, with pounding piano and fuzz guitar, and then about two minutes later, the second song takes over:

"The roses in the window box have tilted to one side
Everything about this house was meant to grow and die..."

So goes a strangely peppy song about a failed relationship. As usual, lyricist Bernie Taupin gets in some great lines, like "I was playing rock 'n' roll and you were just a fan / but my guitar couldn't hold you so I quit the band."

(Here I'd like to stop and marvel at the Taupin/John partnership. As someone who has no clue how music is created, their working relationship is even more astounding to me. How can one person just do lyrics and one just do music? Are you really telling me that Bernie never comes up with melodies for these things, and Elton never changes a word here or there? Neither has ever gotten credit to indicate as such. I'm assuming that Elton writes the music to the already-written lyrics, and that is just so impressive to me, that so many classic songs have been created that way. What if they'd never met?)

Taken as a whole, the song effectively sums up every emotion a person might experience in a romantic break-up, from deep sadness and self-pity, to anger and over-dramatics, to defiance and acceptance. I can safely declare this hands-down, my favorite 11 minute song ever!

Album: Goodbye Yellow Brick Road (1973)
Fave Moment: The "whoa-whoa-ohs" that come in at about the 10 minute mark.