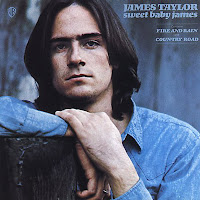 In James Taylor's Rock Bottom we learned that he's never made a bad album. But which one is the most not bad? Well, that'd be 1970's Sweet Baby James, his third album, easily. It's his only record to receive a full 10 star combined rating from the All Music Guide and Amazon.com. The closest competitors - Mud Slide Slim and the Blue Horizon (1971), JT (1977), and Dad Loves His Work (1981) - were a full star behind.

What makes Sweet Baby James so good? Let's hear from the critics and fans. The All Music Guide's William Ruhlmann enjoys the record because of "its attractive mixture of folk, country, gospel, and blues elements, all of them carefully understated and distanced." Rolling Stone's Gary Von Tersch seems to have a deep-down hipster instinct telling him he shouldn't like Taylor's work, but he can't help himself. "This is a hard album to argue with," he concludes.

Amazon.com fans are won over as well. "When we speak of classic records, this is the kind of stuff we have in mind," says Dr.Music. Barron Laycock writes, "There are hours and hours of wonderful experience in store for anyone with this album, whether you've come down in a space ship and are just introducing yourself to his work, or you are an old friend stopping by to sit on the front porch for a spell while Mudslide Slim plays and sings in his unforgettable voice for you. Enjoy!" Others declare Sweet Baby James the cream of the Taylor crop. Patricia T. Ogren states, "If I were stranded on a dessert island with only one album, this would be it" and Ol' Nuff N' Den Sum believes, "If you get any of James Taylor's albums, this should be the one." Frederick Baptist calls the record "James Taylor's best album at least during his full-set-of-hair days."

Baptist actually makes another claim as well. He believes that the album contains no filler and that is what qualifies it to be a classic. This is a good segueway into the Thriller Test, since "No filler" is one of the criteria.

1) At least 3 hits
Taylor's original Greatest Hits album featured 12 songs. Four of them were from Sweet Baby James: the title track (a country folk tune that combines past and present in a beguiling way), Country Road (another searching country tune; the album version features a choir, lending a gospel feel), Steamroller (a genuinely bluesy workout, challenging JT's "sensitive" image), and Fire and Rain (an immaculately-composed and performed account of Taylor's stay in a mental institution). I'd say getting four hits on the best greatest hits album ever is a pretty good batting average (.333). Pass

2) Great album tracks
Outside of the four big hits, there should be some songs that are either accepted classics or could-have-been-hits. Sweet Baby James has 3 of them. Lo and Behold sounds like a cover of an old-timey spiritual, but is actually an original. The lyrics don't make much sense to me, but they certainly are evocative ("there's a well on the hill / You just can't kill for Jesus").
Anywhere Like Heaven is the strongest could-have-been-a-single. It's got all of the Taylor hallmarks, some great finger-picking, steel guitar, and a warm vocal. Finally there's album closer Suite for 20 G, notable for being one of the only truly happy songs on the record and for the wonderfully unexpected R & B rave-up that comprises the last 2 minutes. Pass

3) No filler
This is where the album stumbles. Sunny Skies and Blossom are pleasant but inconsequential, which is the definition of filler. And the minimal blues tune Oh Baby, Don't You Loose Your Lip On Me is too short to amount of anything. And while the album has no bad songs, Oh! Susanna comes close. Taylor has pretty good luck interpreting others' songs (You've Got A Friend, How Sweet It Is To Be Loved By You, Up On the Roof, Handy Man). But this take on the light-hearted Stephen Foster tune falls closer to The Promised Land (a misguided take on a Chuck Berry classic) or his head-scratching version of (The Man Who Shot) Liberty Valance. Partial Credit

4) Memorable cover art
The cover photo represents the searching, slightly depressed nature of the Sweet Baby James' songs perfectly. The colors are cool and slightly washed out. Taylor's eyes stare at you soulfully. He's not smiling but he seems at ease. His hair is long and luxurious. Girls (and some boys) swooned. Pass.

So Sweet Baby James doesn't quite make it to classic status, but it gets darn close. And to be fair, I don't think any of Taylor's albums would have met all four criteria. Don't get me wrong. I have special places in my heart for JT, New Moon Shine (1991), and October Road (2002), but they all have their flaws. And let's face it, Taylor is a singles artist above all else. It's rare for me to recommend a compilation over an album, but Greatest Hits and Greatest Hits, Vol. 2 are truly James Taylor at his finest. Sweet Baby James is merely the next best thing.

James Taylor said…
I have been a big James Taylor fan for years. This man can sing better than almost anyone I have seen. James is really my most favourite singer in the last 40 years. I’ve never miss any of his concert, even James Taylor Tickets were the best sellers. I miss carly and him singing together.
12:11 PM