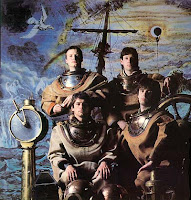 If XTC spent their first three albums searching, Black Sea is where they finally found what they were looking for. Sure, their early work had individual shining moments (This Is Pop, Statue of Liberty, Are You Receiving Me, Making Plans for Nigel, among others), but Black Sea is Andy, Colin, Dave, and Terry's first consistently good record, the album where they became the XTC we know and love.

Perhaps it was the threat of being overshadowed by unassuming bassist Colin Moulding, or maybe it was just creative maturity, but Andy Partridge's songwriting took a leap on Black Sea. Of the four singles released from the album (Generals and Majors, Respectable Street, Towers of London, and Sgt. Rock (Is Going To Help Me)) three were Partridge compositions. More importantly, Sgt. Rock went to #16 on the UK charts, besting Moulding's Making Plans For Nigel by one spot (that it's the worst of the four singles is of no consequence).

Black Sea's first side is flawless. The album opens with Respectable Street, a new wave pogo stick of a song about the bad behavior and hypocrisy hiding behind idyllic suburbia. Witness the scathing second verse: "Now they talk about abortions /in cosmopolitan proportions to their daughters / as they speak of contraception / and immaculate receptions on their portable Sony entertainment centers." That's followed-up by Colin's best tune yet, the anti-war Generals and Majors (who "always seems so unhappy less they go to war"). I'm sure it's no coincidence that Living Through Another Cuba follows. In it, Andy bemoans the pissing contest otherwise known as the Cold War, which was reignited in 1979 by Soviet involvement in Afghanistan. Andy worries that "war is polishing his dream while peace plays second fiddle" and "this phenomenon happens every 20 years or so / if they're not careful your watch won't be the only thing with a radioactive glow." Not your typical pop song topic, for sure.

After those heavy thoughts, the next two songs tackle matters of the heart. Moulding's second (and final) song on the album is Love At First Sight, a bouncy and cutting look at one night stands. My favorite verse goes something like this: "Make a play at lust intention / Only just one thing in mind / Make a slip could be forever / Wedding bells, the shotgun kind." Andy's Rocket From A Bottle is an unabashedly joyful love song, with the chorus' melody soaring like the titular firecracker. Finally, side one wraps up with the excellent No Language In Our Lungs. It was used very effectively in a Freaks and Geeks episode to accompany a choosing-teams-in-gym-class scene, but it's actually the inability of words to express truly important moments. It's ironic coming from a band so adept at lyric-writing.

After that, side two can't help but be a bit of a let down, but it starts off strong. Towers of London is perhaps Andy's most melodically accomplished song up to that point. The lyrics concern the workmen who died building the Queen's palace. Next is Paper and Iron (Notes and Coins), a lesser piece featuring Andy's turn at expressing utter disdain for the idea of being part of the rat race (Colin had already covered this on Making Plans For Nigel). Things rebound on the breathless Burning With Optimism's Flames. Take this in conjuction with Rocket From a Bottle and you can conclude that Andy's love life going very well at this point. In fact, he was a newlywed.

Sgt. Rock (Is Going to Help Me) was the big success but ironically not anywhere near their best work, even up to that point. Not that it's a bad song. In it, a young comic book reading lad imagines his tough-as-nails idol (in this case the DC Comics military hero Sgt. Rock) as a model for dealing with the opposite sex (rather than opposing armies). The idea is sadly relatable to me, though apparently some women took it as misogynistic, probably in the line, "make the girl mine / keep her stood in line." I see it as more pathetic than anything.


Closer Travels In Nihlion is the album's only weak point, mostly because it's too musically appropraite to its title. The lyrical message, about how the punk movement lost its way and became just another identity to try on, is lost in a grating, amelodic, and overlong song. It's not truly awful, just a step back from the great quality of the rest of the record. On the positive side, it showed the band hadn't completely given up on their experimental nature.

Ultimately, it's not just the songwriting that makes Black Sea XTC's first great album. It's also the fact that the band is so musically lock-step with one another. The performances are uniformly strong, even on the lesser songs (it helped that crack producer Steve Lillywhite was once again at the helm). Given the quality of this album, the tenor of the music business at this point, and their steadily rising chart fortunes, there was no reason to believe XTC weren't poised for superstardom.

Grade: A-
Fave Song: No Language In Our Lungs / Generals and Majors

Fun Facts: The album's original title was Terry and the Lovemen, but drummer Terry Chambers refused to wear a tuxedo for the album cover photo. The band later used the pseudonym to record the song The Good Things for their own tribute album, Testimonial Dinner (this is reason #52 why I love XTC). Under Pressure was another rejected title, thus the diver suits on the cover.

Richard said…
I know I'm supposed to say Skylarking, but this and Nonsuch are my favorites.
5:56 AM

Alex said…
Between this album, English Settlement, the underrated Mummer, and the amazing Big Express, XTC was easily the best band in the world for a three or four-year period in the early 80s.
12:39 PM

Lazaro said…
@Alex: 80s?
No wonder I haven't ever heard about this band before. I was just born in the late of 80s. Anyway, It's kind of interesting to listen up to their songs. Maybe I will just love them.
8:37 PM

Keith said…
Honestly, I've never heard of this band before. In 1980 I was so young to listen to the XTC songs. Well, when I was only 4 years old.
I think their music deserves to be heard because the poems are written very interesting. By the way, does this band still active? I understand, this band from the UK, am I right?
10:17 PM

Paul V. Allen said…
Keith-
XTC are from the UK and they aren't active anymore. Check out their albums; you won't be disappointed.
2:14 PM