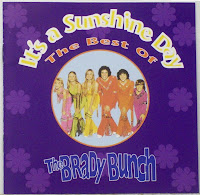 Sitcoms and music have a long, incestuous history. From Ricky Nelson and the Monkees all the way to Miley Cyrus and the Jonas Brothers, the two have made the most of being together. The Brady Bunch, however, put the relationship to the test.

It's A Sunshine Day, a compilation collecting the "best" of that output, was released in 1993. I was in high school and I'm guessing I bought it out of pure curiosity and nostalgia (I was an unrepentant rerun junkie), but the fact that listened to it fairly regularly probably explains why I didn't have many friends, let alone a girlfriend. Listening now, with a more refined ear, I still find some bits of guilty pleasure, as well as a healthy dose of just plain guilt.

The album starts, of course, with Theme from The Brady Bunch with words by acclaimed lyricist Sherwood Schwartz (the show's creator, also known for his classic Theme from Gilligan's Island and the lesser-hit Theme from It's About Time). Also notable are the songs from the above-mentioned episodes: We Can Make the World a Whole Lot Brighter, Time To Change (sadly without Pete's famous voice crack), Keep On, and It's a Sunshine Day. Despite dubious vocal performances (especially check out the druggy "can't you feel the sunshine" bits "sung" by Jan and Bobby on It's A Sunshine Day), all four are hard-to-resist, bright-eyed bubblegum pop.

And the album offers less-famous examples of this as well. Merry Go Round is a joyful tune that features the kids trading lead on the verses and joining together on the chorus. The lyrics aren't half-bad either, with the narrator comparing his love to a day at a carnival. The shouty Gonna Find a Rainbow is similarly optimistic. Candy (Sugar Shoppe) is as bubblegum as it gets, and shows 50 Cent wasn't at all original in his comparing candy to sex. Sample lyrics: "Candy kisses in the moonlight / Sugar shoppin' all through the night." I suggest you ignore the fact that it's brother and sister singing this to one another (Greg and Marsha shared the lead; at least they weren't blood relations).

Other group songs (We'll Always Be Friends and I Just Want To Be Your Friend) overdose on the syrup, and still others were poor choices (the spooky, depressing Charlotte's Web theme and a horn-driven, unsubtle, off key, and truncated cover of Don McLean's American Pie). And the less said about the Susan Olsen (Cindy) solo take on Frosty the Snowman the better.

It's A Sunshine Day also includes several solo singles and they are the true curios. Barry Williams' single single (Sweet Sweetheart, a Goffin and King compostion) is enjoyable, but didn't burn up the charts. If only they'd let him put it out under the Johnny Bravo brand! Barry started - but never completed - a full solo album, and that's probably for the best judging by the unreleased Cheyenne. It's a little bit country, and a little bit crappy.

Speaking of country, even mom Carol Brady, a.k.a. Florence Henderson also got in on the recording act. It was fitting since she got her start on Broadway, but you wouldn't know that from the boring, twangy Born to Say Goodbye. That leaves Maureen McCormick's Truckin' Back To You as the final - and best - of the three solo singles. Even though the song's title and chorus would probably be more suited coming from someone who might actually drive a semi, it's still catchy. 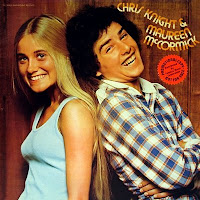 Finally, there's Road to Love, from Chris Knight and Maureen McCormick's album together. According to the liner notes, Chris was an extremely reluctant participant in the musical side of things, and Road to Love, a warbly treat-your-fellow-man well sort of message song, is proof that his instincts were good. On the positive side, check out that cover photo!

Interestingly, the liner notes also reveal that The Brady Bunch musical act basically killed The Brady Bunch television show. During the 5th season, the Brady actors negotiated to have half of all future episodes be musically-related. Cousin Oliver had already arrived and signaled a death knell, but this was the nail in the proverbial coffin. Sherwood Schwartz decided to end the show instead of turn it into a musical showcase.

It's a Sunshine Day is a sporadically-fun and always-fascinating compilation, but it's proof positive that Schwartz was a wise man.

Unknown said…
"Time To Change" without Peter's voice crack is a crime against nature. But not as much as a crime as Marsha's bosom's on that album cover. Yecch.
6:52 PM

Tom said…
The album "It's Sunshine Day was released when I was still elementary school. Because my father always listened to this music, it made me like this music too. Now, I want to listen to this music again.
9:14 PM