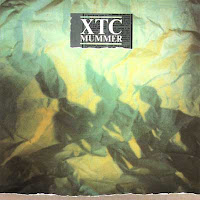 Mummer marks the debut of XTC as a studio-only band. In the middle of a particularly-taxing U.S. tour for English Settlement, frontman Andy Partridge swore off touring forever.

This wasn't unprecedented, and especially not among Partridge's primary musical heroes. Brian Wilson quit touring with the Beach Boys in 1965. The Beatles gave up the road in 1966. In Wilson's case, the first album of his homebody existence was a little number called Pet Sounds. The Beatles made Revolver. Both albums are perennially in the discussion for best album of all time.

Mummer is not quite in the same league as those two, but it's not a bad album. In fact. On most days I'd take it over English Settlement.

In some fans' minds, Mummer is a black sheep in the XTC catalog thanks to the presence of synthesizers on several tracks. Though the record was partially helmed by Steve Nye (who produced New Romantic faves Japan), I don't get the idea that synths were used for particularly commercial reasons. I may be mistaken, but I believe that in 1983 every band was legally mandated to use synths! Due to a variety of factors (a girlfriend in Australia, the fact that the band had stopped touring, the lighter, less band-oriented nature of the songs) drummer Terry Chambers quit in the middle of the sessions. He was replaced, though not on a permanent basis, by Peter Phipps, of Gary Glitter's backing band.

All of this lends Mummer an experimental air, and what it lacks in cohesion it makes up for with charm.

Most of the record's best songs are on its first side. In fact, all 3 singles released from the album are there. The first is Colin Moulding's Wonderland, the album's worst synth offender, but a great song nonetheless. It's about a frustrated, rejected lad whose lady has unrealistic expectations of romance (she seems to be holding out for a rich, handsome Prince Charming). My favorite part is the way he upbraids her as he spits out the final line: "Caught in your superficial, nonexistant, fairy-story, wonderland."

Andy's Love on a Farmboy's Wages sports a wicked acoustic guitar riff and an ultra-melodic bridge.  Its subject matter is not far from Wonderland's; both concern the intersection of romance and money. Partridge's narrator worries that he can't provide for his girl on a meagre income (he'd revisit the theme in Skylarking's Earn Enough For Us). One wonders if the sudden worry was bourne out of the decision to stop touring and the lost income that resulted. When he sings, "The only job I do well is here on the farm," he seems resigned to the fact that being a musician will never make him rich.

The third and final single is Great Fire, a love song that likens romance to flames burning out of control. Opener Beating of Hearts sounds ominous with its jungle drums and vaguely Indian phrasings, but it's actually a hippie anthem about love being stronger than violence and hatred.

Side one is rounded out by Deliver Us from the Elements. another synth-fest from Colin. Its a spooky (both musically and lyrically) tune, about how we're powerless before extreme weather and natural disasters. It almost seems like a prayer: "Oh Lord deliver us from the elements / We've no defence, we are impotent." The backwards guitar looping shows the band reveling in the freedom of not having to reproduce the song live.

The album's second half is a fairly steep drop off. Human Alchemy has intriguing lyrics about the shamefulness of slavery (using the metaphor of turning human beings into gold), but it's musically plodding, and I'm not a fan of the distorted vocals. Nor am I enamored of the jazzy Ladybird. Its melody is occasionally beguiling, but more often boring. The bitter break-up tune Me and the Wind is similar. The "have I been such a fool" part is very memorable and the lyrics aren't bad ("Now that I'm out and I'm shouting in doorways / Freed from a love more like murder / I should be singing but in liberation/ Feel like a ship with no rudder"), but the minimalist, amelodic verses bog things down.

That leaves Colin's war hero anthem In Loving Memory of a Name (which is very musically upbeat number considering the subject matter) and Andy's bitter Funk Pop A Roll to pick up the slack. And they do. The latter especially. It's about the general chew 'em up and spit 'em out music industry: "Funk pop a roll the only goal /The music business is a hammer to keep / You pegs in your holes / But please don't listen to me / I've already been poisoned by this industry." Ironically, it would have made a good single.

The CD contains several bonus tracks, the best of which should have been called up to the a-team. Jump is a catchy acoustic number encouraging a reluctant romantic to express his feelings. Toys finds childrens' playthings acting out adult situations like racism, sexual politics, bullying, and war, reminding us that kids are always watching and emulating. I would have taken these two and chucked Ladybird and Human Alchemy in their favor. The album would have been stronger for it.

For a variety of reasons (the lack of a supporting tour, the new sound, the muted cover art), Mummer was XTC's worst showing in the charts yet, both in albums (#51) and singles (Love On a Farmboy's Wages peaked at #50, Wonderland and Great Fire didn't chart). From this point on, XTC would never quite recover their commercial mojo. Their artistic mojo, however, was just getting warmed up.

Grade: B-
Fave Song: Love On a Farmboy's Wages