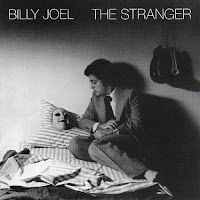 Let's get straight to it. Billy Joel's most beloved album is clearly 1977's The Stranger. Here are some statistics:
Of course numbers do not a good album make. What do the critics and fans have to say? Well, All Music Guide's Stephen Thomas Erlewine says, "Joel rarely wrote a set of songs better than those on The Stranger, nor did he often deliver an album as consistently listenable." Though I must point out that this is probably not as over-the-moon as it sounds considering STE's obvious dislike of Joel (none of his albums get 5 stars and STE writes that Joel's "lyrics are often vague or mean-spirited. His lyrical shortcomings are overshadowed by his musical strengths. Even if his melodies sound more Broadway than Beatles.").

Amazon fans were not so backhanded. Take it away The Great Me: "This is yet another album that earns my respect. It doesn't have but one of my favorite Billy Joel tracks but it's my favorite album by Billy Boy. It is a true masterpiece in which Joel weaves his audience nine Godly tracks of beauty."

Matthew G. Sherwin adds that The Stranger "is indeed one of rare albums that is a must have for any serious collector of today's music!" BillyJoelNtrDame claims, "Nearly every song shines with the glimmer of virtual perfection." And an anonymous customer with questionable priorities states: "This CD would be the first thing I would grab if the house was burning down!!"

But the best comment of all comes from Thomas Magnum, who calls The Stranger "a virtual greatest hits record." He's dead on. Let's revisit and consider that statistic from above. There were 11 songs on the first disc of Billy Joel's two volume 1985 Greatest Hits compilation. Six of them were from The Stranger. The Stranger only had nine songs in the first place. That's a ridiculously high success rate.

But what about the Thriller Test? You know, if we wanted we could just as easily call it the Stranger Test. Witness:

1) At least 3 hits
How about four? Movin' Out (Anthony's Song), She's Always a Woman, Only the Good Die Young, and Just the Way You Are. The latter won the 2 aforementioned Grammys and its sweetness helped cement Billy as anathema to rock snobs everywhere. Movin' Out is a cynical piece questioning the promises of consumerism. She's Always a Woman is a often held up as misogynistic, given the not-so-flattering list of characteristics and the title phrase that seemingly generalizes them to encompass the entire female gender. However, the "she's always a woman" lead-in is preceded by the word "but" which generally indicates that whatever follows contradicts what came before. I would actually argue that the song is the opposite of misogynistic, that it's about the emergence of women as anything other than housewives and sex objects. Either way, the song has a gorgeous melody. And the all-your-religion-has done is shelter-you-from-reality anthem Only the Good Die Young may not be entirely accurate, but it's an admirable effort nonetheless. Pass.

2) Great album tracks
Sure. The title track never charted, but easily could have. It's an incisive look at the shifting nature of identity. Scenes From an Italian Restaurant is Billy's Abbey Road moment, stitching together three distinct song bits into one epic. It's one of my favorites, even though it doesn't make much sense as a whole. And I'd put Vienna here too, even though it didn't get the attention the other two did. Interestingly, its "you have your whole life ahead of you" message is in direct opposition to Only the Good Die Young's live-while-you-can philosophy. By the way, Billy has named this one of his two favorite songs of his own (the other was Summer, Highland Falls). Pass.

3) No filler
It's easy when you keep it short. Get It Right the First Time and Everybody Has a Dream aren't in the same league as the other 7 songs, but neither are they just there to take up space. The former features more dodgy life philosophy ("you have to do this right on your first try") but is a catchy tune even so. Closer Everybody Has a Dream sounds like a treacly Disney theme, but is actually about a lost man whose only comfort is imagining being at home with the woman he loves. Pass.

4) Memorable cover art
The black and white, the suit, the unmade bed, the mask, the boxing gloves. It's self-consciously arty, but it's also iconic. Pass.

So The Stranger is basically a kick-ass album, but that's not to say that doesn't have worthy competitors in the Billy Joel catalog. Anyone looking to expand their Billy Joel experience cannot go wrong with Turnstiles (1976), 52nd Street (1978), Glass Houses (1980), The Nylon Curtain (1982), or An Innocent Man (1983). The latter, a stylistic tribute to Motown, James Brown, and doo-wop, is my own personal fave.

Alex said…
This is one of those records that was so ubiquitous that I grew really, really weary of it. Years later, when I gave it another listen, I remembered and appreciated how very, very good it was (and still is).
1:48 PM