264. The Bird and the Bee: Interpreting the Masters Volume 1: A Tribute to Daryl Hall and John Oates (2010) 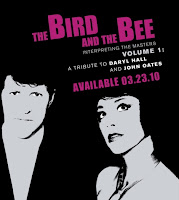 The cover song is one of the unsung (well, not literally) heroes of pop music. It gives new musicians a place to start, fills the empty spots on albums, and shakes up otherwise predictable concert set lists, among many other things. In fact, one might say that pop music as we know it wouldn't exist had a truck driver from Tupelo, Mississippi not decided to add his hillbilly twang to some R & B songs and four lads from England not lived in a shipping town where the latest Little Richard and Miracles 45s were readily available for them to learn and recreate.

If you break it down, there are basically two types of cover songs. The Homage is a faithful reproduction, usually done out of love and admiration for the original. The Re-Thinking takes a song and gives it a semi-to-very radical new arrangement. Within these types there are lots of reasons artist choose to record cover songs. They include (but are not limited to): a) to score a guaranteed hit, b) to rescue a good song from obscurity, c) to make an uncool artist cool again, d) to be funny or ironic, e) to have fun, and f) to donate the proceeds to charity.

This is why the cover song cannot be dismissed, because it has enough appeal for everyone. The most basic and superficial of music fans love covers, because anything familiar to them is good. They prefer The Homage, for reasons a, e and f. Rock snobs tend to gravitate toward Re-Thinkings, with reasons b, c, and d considered acceptable.

Though I'd never truly dismiss covers as a viable form of musical expression, I remain wary of them. I usually have no use for faithful cover versions that are little more than note-by-note recreations. Why not listen to the original instead? That means I lean toward the rock snob mindset (though I draw the line at the ironic cover, especially when it's a white artist covering a hip-hop song as a ballad, e.g. Ben Folds' Bitches Ain't Shit. Sure it was funny at first, but once everyone started doing it, the joke got real old). That aside, there are lots of great examples of Re-Thinkings: Jeff Buckley's Hallelujah, The Black Crowes' Hard To Handle, Otis Redding's Satisfaction, every Bob Dylan cover ever. There are bad ones too (Madonna's American Pie anyone?) but I tend to love the covers that respect the original and bring something completely new to it at the same time.

So where does The Bird and the Bee's new album, Interpreting the Masters Volume 1: The Songs of Daryl Hall and John Oates fit? Irony seems a likely culprit considering Hall and Oates' cheesy image, but at the same time, you don't do a whole album of songs by an artist you don't truly respect. The next logical purpose of such a project would be to point out the strong craft behind the original songs (and thus make Hall & Oates cool again) by stripping away the '80s production, but these are Homages. They don't reproduce the originals exactly, but they hew very close, even down to prominent use of synths and drum machines. Anyway, at this point only the snobbiest of the snobs still refuse to acknowledge Hall & Oates' musical cred, and those wretched few aren't likely to be won over by the faithful versions of the originals.

So it seems the album is to be taken at face value, as a band simply recreating songs they truly love. And that makes it hard not to like, even more so when The Bird and the Bee principals Inara George and Greg Kurstin sing about their inspiration on the album's lone original, opener Heard It On the Radio. The song is about the way music becomes intertwined with important moments in our lives, especially when we're young: "When we first met they were playing that song and it stuck into my head, stuck into my head," George sings. Even without a Kiss On My List mention, it's not a far jump to assume Hall and Oates were the soundtrack to many youthful days for George (35 years old) and Kurstin (39). I suppose it's the highest compliment that I actually thought Heard It On the Radio was just another H & O cover before I did a little investigation.

If I have any quibble with the album it's in the song choices. The Bird and the Bee play it ultra safe, covering only the biggest of the big Hall and Oates hits. There's not a deep cut or lesser hit to be found. In fact, of the 8 covers on the album, 5 went to #1 in the U.S.: Rich Girl, Kiss On My List, Private Eyes, I Can't Go For That (No Can Do), and Maneater. The remaining 3 - Sara Smile, She's Gone and One on One - only made it to #s 4, 7, and 7 respectively. Not that I'd have necessarily picked lesser-known-or-successful songs, just different ones, such as Out of Touch, So Close, or You Make My Dreams.

Since the songs are redone so faithfully, the main thing to latch onto is the fact that it's a female voice singing them. This leads to some interesting conundrums once again related to song choices, since Inara George is not a lesbian (she's married to Lawrence Kasdan's son Jake, who deserves to be forever immortalized for directing Walk Hard: The Dewey Cox Story). But I suppose you can imagine she is, when you hear her sing "it's you and me forever" to a woman named Sara on Sara Smile, or lament the fact that her lover has left her on She's Gone. Actually I think it's pretty cool, but one does wonder about the justification (it would have been supremely easy to change the pronoun on She's Gone). On the other hand, Rich Girl and Maneater make George sound like one of those women who can't get along with other women. And still other songs actually benefit from the female perspective, at least in my heterosexual male estimation. One on One, Kiss On My List, and I Can't Go For That (No Can Do) (especially in the "I'll do anything you want me to" bit) become exponentially sexier with a woman singing them.

In the end, Interpreting the Masters Volume 1 is a fun, if strangely-conceived, album. It doesn't reveal anything new about Hall and Oates (except maybe that Private Eyes is a better song than I remembered), nor will it win you over if you don't already like them. It probably reveals more about The Bird and the Bee than anything, that they're willing to declare their love for something uncool without trying make it cool. I, for one, am definitely hoping for a Volume 2, and wondering who might get spotlight (I suggest Tears For Fears or The Pet Shop Boys).

Grade: B-
Fave Song: Heard It On the Radio