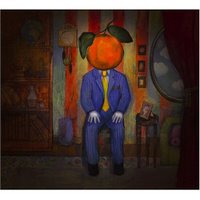 Why on Earth did I buy a David Mead album?! I first heard of him in 2001 via a kind review of his second CD, Mine And Yours. I intended to buy that record and even listened to it at a listening station a couple of times, but never pulled the trigger.

Then I saw him in concert, as an opener for Hem. It was just him and a guitar and I was unimpressed with both his songs and his attitude. He seemed miffed that the audience was more interested in talking to one another than listening to him. And rather than getting over it, he just kept sniping. Okay, I get annoyed at indifferent concert audiences too, but he was the opener, for goodness' sake!

So why did I buy his new album, Tangerine? Maybe it was more good reviews, or the whimisical cover art or the low introductory price. Whatever the reason, I'm glad I did. It's an unassuming gem of a pop album.

The opening title track is a piano-driven instrumental with lush harmonies. It's a nice little intro, in more ways than one; the final melody line at the end of the song apes the opening line of the second song, Hard To Remember. That tune is a wry ditty with carnival organ and some great lines. My favorite: "I'm trapped in the orbit of your rolling eyes."

The Trouble With Henry is not about a dead body that keeps showing up, but it's almost as seedy. Mead tells about his problematic friend using a '70s lounge vibe. As you might guess from that description, Tangerine covers a lot of ground in a short time. Chatterbox reveals Mead to have the heart of a power-popper. Reminded #1 is a nearly a capella rumination on a dead romance. Hunting Season comes on like a jazz standard but blossoms into a Beatleish ukelale stomper. And Suddenly, A Summer Night wouldn't be out of place in a stage musical.

Other highlights: Fighting For Your Life has one of those immediately familiar choruses. It's one of those you hear and think "where did he steal that from?"; Making It Up Again is as pretty as pop music can get; and Hallelujah, I Was Wrong is my favorite, a 2 and a half minute TV theme in waiting. It hits more melodic highs than most songs do with twice the running time.

This is a shambling, off-the-cuff album. It's almost as though Mead and his players went unprepared into a studio stocked with instruments and came out with an album. And I don't say this much anymore in the iPod era, but I'm less struck by individual songs as I am by the whole 12 song experience. I couldn't be more impressed by Tangerine, or surprised that it came from David Mead.

Grade: A
Fave Song: Hallelujah, I Was Wrong