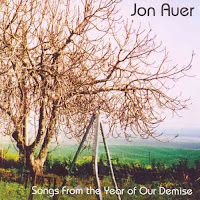 Paul Simon once sang, "Losing love is like a window in your heart / everybody sees you're blown apart." This is especially true for singer/songwriters. Those of us who can't express our sorrow ourselves turn to song. The musicians have to create them for us. I'm forever fascinated with the transformation of pain into art. When a songwriter can synthsize their heartbreak into something that others can relate to and take comfort in, that's special.

Jon Auer has done that on his new solo album, Songs From The Year Of Our Demise. Auer has been making clever power pop since 1990, first with The Posies, and also as part of the new line-up of Big Star, but never has he been as personal and engaging as he is here.

On the surface, Songs From The Year Of Our Demise seems to be a morbid break-up album. Opener Six Feet Under serves as a thematic overview of what's to come. The narrator mournfully accepts that a relationship is over: "There's no time machine to take us back / No scientist to change the fact / We say our lines and fade to black." It's too bad that this song came along too late to be the theme song to the HBO show. The chorus would be killer with credits rolling by: "So don't get mad and I won't cry / And don't expect a long goodbye / I'll call you when we're six feet under ground."

So there has definitely been a break-up. Other songs address this too: Four Letter Word uses sinister, bopping piano and a marching beat underscore a rather bitter note to the ex-lover: "I'm not ashamed that I treat your name like a four letter word now." Rocker My Sweet Unknown is another obvious relationship song steeped in macabre imagry: "Together you and I / We could watch each other die / And be happy." Angelita seems to address the child of divorce, acknowledging how much she has been hurt.

But things get thorny with some of the other songs. Having established that he's not above using death as a metahpor, it's difficult to tell on some songs whether or not Auer actually IS singing about death. Take Song Noir, a wallowing bit of regret that packs a powerful punch. A picked guitar line, a glockenspiel and a cello accompany lyrics like: "And how I hate that I still wait for you to call" and "Would you appear if I said your name again and again and again and again?" It could go either way.

Cemetary Song is a countryish rumination on loss: "There's no wondering where you are now / You're so far now / But you can't get any farther away." That describes death pretty darn well. What's more, the line, "in your arms I learned to breathe" makes me think that the song is about a mother.

And there's are at least two more songs that support the mother theory, the tortured Jospehine contains the lines "I saved your chromosomes unknowingly" and the epic You Used To Drive Me Around is obvious just from its title. That song also contains the repeated lyric: "I've had enough of all your bribery and mimosa" which hearkens back to the album's second song Bottom Of The Bottle, which by all rights is about an alcoholic. If I were to guess, I'd say these songs address an estranged relationship with an alcoholic mother who eventually passed away. If you assume Auer is writing from real life, he really did have a bummer of a year.

With such heavy topics, you'd think the album would be a bummer too. Thankfully, it's not. Auer does a masterful job of allowing the songs to be catchy and powerful while still keeping the focus firmly on the lyrics. Only one, the this-sounds-like-a-Brian Wilson-in-bed-demo Adios, drowns in its own tears.

There's even some lyrical hope as the album wraps up. Sundown gives up words for a "sha-la-la-la-la-la-la" chorus and the phrase, "I'll believe if you believe." Wicked World is a love song imagined as a novel, sort of a subdued companion to Elvis Costello's Everyday I Write The Book. And closer The Year Of Our Demise is a eulogy that could apply to both the mother and the ex-lover, "And I want you to know / That I loved you so."

This definitely isn't the album I expected to grab my attention this summer, not a mysterious, knotty journey into the dark night of the soul. But luckily we don't always get to choose what grabs us, because those windows in the heart can be pretty revealing.

wcdixon said…
I will check out Auer on your recommendation...