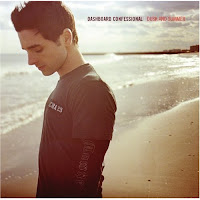 Dashboard Confessional are a polarizing group. Their fans worship them. In concert, the audience shouts along to every word Chris Carrabba utters, verse to chorus and back. To their detractors, they embody the worst of emo's whiny, self-absorbed tendencies.

I've always been on the more positive side of the pole, mostly because I could relate to Carrabba's tales of fucked-up girls. The band's 2003 album, A Mark, A Mission, A Brand, A Scar, contained a satisfying number of pissed-off odes and ruthless condemnations, such as Rapid Hope Loss, So Beautiful and Hey Girl. In the latter Carrabba used his anger to display a clear worldview, "Where I'm from we live like it's the latest attraction."

Unfortunately he's gone fuzzy on the band's new album, Dusk And Summer. Strange to say, but it seems that as Carrabba's love life has improved, his songwriting has suffered. A full half of the album consists of over-dramatic odes to the power of love and sex. Sounds nice, right? In practice, it's annoying.

That's partly because his joy is rarely unconditional. There always seems to be some sort of obstacle harshing his ardor: time, distance, another guy, or reluctance. And there's an undercurrent of creepiness in his approach, especially in the way he describes sex. On the title track we learn that, "she kissed your teeth" and in The Secret's In The Telling he claims, "I can taste you in my mouth."

Clearly, the guys in The 40-Year-Old Virgin would chide Carrabba for "putting the pussy on a pedestal." In Reason To Believe it seems he'll die without his sweetheart: "My heart is sturdy but it needs you to survive." And in Heaven Here, he likens sex to salvation. Take that, religious right!

Even stranger is Currents, which doubles as an ode to a lover and to smoking. Yes, smoking. "The air is visible around you / Rising up and off your lips," it begins. And it ends thusly: "So hot with love / It burns our hands."

At least it isn't ALL bad. In the ballad Stolen, a single encounter leaves a strong impression and Carrabba comes off as understated and sweet, for once. Opener Don't Wait is catchy and lyrically obtuse, leaving the focus clearly on the music. So Long, So Long is a slightly overcooked duet with Adam Duritz about saying goodbye. It contains some nice lyrical detail; a busted speaker in one car door makes it "so nothing sounds quite right."

Finally, there's Slow Decay, a bracing tale of a soldier returning home from war. It's told as a dialogue, first a father speaking to the soldier, reassuring him that he's "safe now" and the son responding with the guilt he feels at the death he's seen and dealt. As you listen to the song, it sounds like a songwriter who has found his purpose, as though Carrabba's innate sense of drama can finally express itself properly.

Too bad it's only one song out of 10. As it is, Carrabba's talent seems somewhat wasted on an album that will keep his detractors detracting, and may just add to their number.