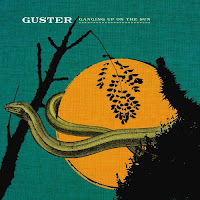 Expectation can be a bitch. I tend to believe the events, moments and experiences we truly enjoy in life are the ones that take us by surprise. The ones we count down to and anticipate and build up in our minds often manage to bring us joy, but at a higher cost. Those events, moments or experiences have to live up to the high expectations our mind has created.

This goes for CDs too. Every month there are CDs I anticipate, mostly by artists whose work I've enjoyed in the past. Sometimes I read reviews or articles in advance, and depending on what they say, that can stoke my fire even more. And then there are those unexpected gems. Something I heard on the radio, or read about, or discovered on a listening station or had recommended by a friend. These are the CDs that have a better chance of taking hold, because they carry no expectations. And to complete the circle, those artists that really impress me usually get a free pass for their next release.

In 2003, Guster released Keep It Together and I discovered it through a friend. In my review at the time, I said it was one of those unexpected musical joys that seem to land in my path every so often. Now here we are three years later, and Guster's new album is one I marked on the calendar. On the plus side, that means the band automatically gets my $11. On the downside, it also means the album has its predecessor to live up to. It won't be so easy to earn my good graces this time around.

It looks like Guster were set on learning that the hard way.

To be fair, let's look at my expectations, and see how the album fares against them. For one, I expected Guster to give me some unabashed sunny pop music. How did they do? Well, the first song, Lightning Rod, is an immediate let down. It's languid, comprised mostly of accordian and wordless harmony. It'd be fine as a mid-album breather, but as an opener it can't even live up to its title. Another underacheiver is Ruby Falls, an indulgent 7 minute epic that's too long to be rocking and too noisy to be touching. There's also Empire State, which despite an interesting lyrical structure can't really get past boring.

The band doesn't let me down completely though. Satellite is everything you love about Guster: reverberating guitar, bongo beat, well-placed harmonies, carnival organ. (But did we really need another "satellite" song?) Manifest Destiny comes on like a Ben Folds b-side, with some fleet-fingered piano and a horn section. And Dear Valentine is a fine power ballad; I've found that a band can rarely go wrong writing a song with the word "valentine" in the title.

My other expectation of a new Guster record is that it contain some clever wordplay. On this count the band fails even more disasterously. Only the single One Man Wrecking Machine gives us the sort of memorable smartass lyrics that were all over Keep It Together. Though it does lose points for being fixated on high school; these guys have to be in their 30s. Manifest Destiny manages to use the word "secede" and that's a plus. And Empire Falls gets this nugget in: "Been talking to Jesus / He's not talking to me." But otherwise the record is all bland nondescript phrases like "hang on", "c'mon" and "you're my satellite." And who is The Captain? We never really find out.

Unfortunately, it seems Guster is the latest victim to have fallen under the weight of my expectations. But the band can take heart; I'm well aware that all artists' careers have their peaks and valleys. And guess what? When their next album comes out, my expectations will be pretty low.

wcdixon said…
So new Guster sounds like a pass...but Keep It Together worth getting (I've never heard of them)
8:55 PM

Paul V. Allen said…
Thanks for the positive feedback!
9:47 PM