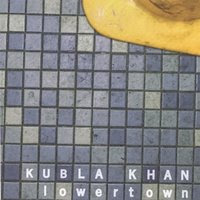 A sense of humor is not valued in rock 'n' roll. Spinal Tap aside, I understand why. As a kid I worshiped "Weird Al" Yankovic; I wore out his tapes in my Walkman. However, as an adult, I can only take him in small doses. Repetition isn't what it used to be, and the jokes tend to wear thin.

The best way for bands to get around this institutionalized stoicism is to be "quirky." It's as though the rock establishment has said, "Be clever or weird or surprising, but don't TRY to make us laugh. We want to laugh on our own terms."

Bands like They Might Be Giants and Barenaked Ladies have mastered this by balancing their cheek with serious sentiment. And Twin Cities natives Kubla Kahn follow that path nicely on their new CD Lowertown. Of the seven songs, at least four are pretty damn funny, in unexpected ways.

In the opener, Memory, the singer is having trouble remembering a girl's name, despite meeting her a few times. As the song progresses, he runs through some potential choices that make me giggle every time: Susie, Bobbie Sue, Lorraine, LouAnn, Molly, Tina and Mary Jane. Despite his lapse, the song is kind of sweet, especially when he tells her he'll be sure to remember her heart and soul. And that sweetness is what saves the song from becoming a gimmick. Skate works similarly. It's a nostalgic teenage date fantasy where narrator is psyching himself up to ask a girl on a date: "I'm gonna make a move to ask you out to skate / And if you say yes, then life is great." While the mentions of arcades, stonewashed jeans and concession stands bring a smile, the situation is universal and the heart-on-the-sleeve sentiment is endearing.

Nels is the tune that most closely walks the edge between song and joke. "My friend Nels is a cellular biologist," goes the chorus over a swampy roadhouse blues beat, "And when he gets some time off to himself / He takes that Double K off of the shelf." (I have to admit that I did some research to discover that Double K is a vodka drink with kiwi and kiwano.) The funniest part of the song is the bridge "When the lab is empty / And the e-mails have all been checked / And the cells are sleeping for the night / And it's all right."

Finally, there's Couch, which features a jazz intro and a Beatles horn revelry outro. The narrator realizes that he's getting old when he finds himself in a conversation about his couch. This sets him off on a litany of complaints: "My metabolism's slowing / I need to get more sleep / I hate that radio music / The stairs are getting steep." It's funny, yes, but wholly relatable.

The other 3 songs, What Did I Do, Catch The Show and Strange New Town are straight ahead rock tunes, not funny at all, but enjoyable just the same.

I have to say that Kubla Kahn's sound is strongly reminiscent of Phish (with an added horn section). Where that band could only sporadically get it together in the recording studio, Kubla Kahn seems much more suited to it. That's thanks in part to good songwriting, but also to the expert production of Hopefuls vets Eric Fawcett and John Hermanson (who also both play on the CD) and the mixing genius of Alex Oana.

The band is also similar to Phish in that their songs are tailor-made for live shows. You can just envision the crowd dancing and singing along faithfully to most of the tunes on Lowertown. Apparently the band still all have their day jobs and only play a couple of gigs a month. It's a shame they can't go out on the road, because I have a feeling if they did it wouldn't be long before they had an army of faithful followers.

And that's no joke!

Paul V. Allen said…
Okay, so it turns out I missed the obvious and that "double K" in the song Nels actually refers to Kubla Kahn! So it isn't actually about a drunk cellular biologist, but a music-lovin' cellular biologist. I like that more anyway.
4:52 PM