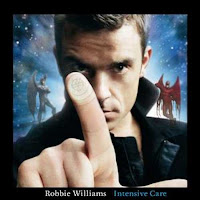 One can't really blame U.K. pop star Robbie Williams (or his label) for giving up on an American breakthrough. His first American release, The Ego Has Landed was actually a combination of the best songs from his first two U.K. albums. It arrived with high praise and a couple of ready-made hit singles: Angels and Millennium. There was minor success, but not as much as expected.

His next effort, Sing When You're Winning, was even stronger, just as critically adored, and performed even worse. His unfortunate final attempt to make an American splash was 2003's Escapology, a passable album that was clearly not strong enough to grab the ears and wallets of U.S. buyers.

So his latest record, Intensive Care, will not even be released stateside. And that's a shame, because it's his best one yet. Perhaps that has something to do with who he's working with. He has left behind longtime collaborator Guy Chambers (like an inverse version of pop star he's most often compared to, Elton John, Robbie seems able to only write lyrics, not music). His new partner is Stephen Duffy, an original member of Duran Duran, leader of The Lilac Time and co-writer of many Barenaked Ladies' tunes.

And ironically, the album is littered with American session players. Greg Liesz, Buddy Judge, Davey Farragher, Matt Chamberlain have played with the likes of Beck, Wilco, Aimee Mann, Smashing Pumpkins and They Might Be Giants.

So the music is top-notch. And Williams' lyrics are his typical combination of sublime, clever and ludicrous. Take the opening line of the album: "Here I stand victorious, the only man who made you come." Obviously, he hasn't lost any confidence. Some other prime lyrical nuggets include, "Oh Lord make me pure, but not yet" (Make Me Pure), "She asks me how I'm feeling / Well, I don't wanna think that hard" (Your Gay Friend) and "Just relax / It's what Jesus would do" (Sin Sin Sin).

Highlights abound. Tripping is ska-flavored, features Robbie both "rapping" and singing in falsetto, and yet somehow manages to not be disastrous. Maybe that's because the melody brings up fond allusions to Eddy Grant's 1983 hit Electric Avenue. And I almost wonder if it's intentional, because the lines "I know it's coming there's gonna be violence" matches well with "down in the streets there is violence." It's not the only place that Williams uses lyrical familiarity to his advantage. In Random Acts Of Kindness he twists AC/DC when he says "For those about to die, we salute you." And the opening line of Advertising Space, "There's no Earthly way of knowing / What was in your heart / When it stopped going" brings to mind Willy Wonka's nonsensical rant during the boat ride down the chocolate river. The song itself is as stately and mannered as a late-period Elton John ballad.

Please Don't Die is another Elton-a-like, and also a frank expression of love. Though Williams can often come off as cheeky, he obviously has his serious side. Like a spiritual successor to God Only Knows, the song expresses love through the fear of loss: "If you die before I leave," Robbie sings, "What on Earth becomes of me?" Tasteful piano and orchestral flourishes underscore his plea.

Your Gay Friend is the album's most intriguing song. Not only is it done up in the modern style with an angular guitar line and swollen synths, but it also has a twisty story. I believe the song is about an ongoing affair, with Robbie playing the part of the gay friend to fool the husband while he gets down with the wife. The song is also notable considering the gay rumors that have dogged Williams. He's bold to fly so close to the topic, but I suppose he has never really been shy, referring to it in the earlier songs Kids and Me And My Shadow.

Finally, A Place To Crash rides a Keith Richards riff and "ow-ow" shouts to summarize the joyful pop spirit of the entire album. Among the expletive-laden lyrics we get a glimpse of a more generous and humble Robbie and a nice contrast to the opening line: "If not for you I wouldn't come at all."

It seems to me that if Williams continues to make albums of this strength and consistency, he won't have to worry about breaking in the U.S. America just may come knocking on his door. Until then, I'm happy to pay import prices.

Carmamma said…
He kind of became the Kylie Minoque of international pop stars, which is really a shame.

I still love him and will buy his music, I don't care if they are import prices, I find his music worth it.
10:00 AM

Carmamma said…
Let me clarify that last comment- Robbie has become like Kylie- in that they are both international pop stars who made a small explosion in the US and quickly lost our (not mine) attention and faded into the Hall of Has-Beens, yet they remain huge pop stars everywhere else. It's pretty sad and undeserving for both careers.
8:09 PM