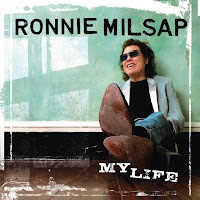 I'll admit Ronnie Milsap is one of the odder musical obsessions of my life. It all started when I sat two rows behind him on an airplane that was en route to Nashville. I wasn't impressed; I didn't even know who he was. And my thoughts were elsewhere anyway, since I was headed to my grandfather's funeral.

Later, I decided to check out Ronnie's music. It spoke to me immediately. Which is strange, since I'm not much of a country fan, and Ronnie's popularity seems to have peaked in 1983. But there was something about the soulfulness of his voice, and the way the songs were so earnest, simple and straightforward. I became an immediate fan, and Ronnie rocketed into my top 10 favorite artists, an ascent rarely seen before or since.

That's why I was a bit more nervous than excited about his new CD - the first country album he's done since 1993 - especially after hearing the Jimmy Buffet-lite lead single Local Girls. I was afraid the album would be an embarrassment.

Turns out I needn't have worried. Of the 11 new songs, Local Girls is by far the worst. The rest of the album is exactly what you'd expect: Lyrically simple, passionately sung and timelessly arranged. In fact, at least 7 of the songs could fit seamlessly on Ronnie's 40 #1 Hits compilation. Ronnie doesn't write his own material, but he's a sure hand at picking songs for himself.

Some artists tend to specialize in either love or heartbreak. Ronnie can sell you both. The funky hillbilly opener, You Don't Know My Love is actually a challenge to a reluctant lover: "If you think I'm lonely, only talking trash / That my mouth's writin' checks my heart can't cash / Then here's my number, baby, call my bluff / 'Cause you don't know my love." There's also an excellent backup vocalist who REALLY gets into it. On the flip side, there's If It's Gonna Rain, a cry-into-your-beer lament. Ronnie is completely resigned to heartbreak over a lost love. "I'm gonna cry a river of tears," he declares over a weepy fiddle, "It's gonna rain and rain and rain 'round here for years."

A couple of other standouts deal with that time when you know a relationship is over, you just aren't quite ready for it to be over. In Every Fire, he tries to move on but just can't. "Every time I go and find a tiny spark / I'll say something wrong / And it's easy to tell that it's still raining in my heart / And that's been putting out every fire I try to start." The narrator of Why Can't I is struggling as he sees his ex move on with her life and wondering why he can't. The song is done in Ronnie's storyteller style, where he almost talks the verses, and then wows us on the chorus by opening up his voice. It's very effective, especially with a great pedal steel guitar accompaniment. I must also mention that the song is exactly 3:49 long!

It strikes me that Ronnie picks songs that speak for him. Time Keeps Slippin' Away is a rockin' reminder that we always need goals. It's sort of a country version of Bruce Springsteen's Hungry Heart. The title track is all about living a life you can be proud of: "I wanna be an open book / Say I gave more than I took." And It's All Coming Back To Me Now is a celebration of good karma. Ronnie supposes the new love he's found is payback for living right: "It's all those hearts I never broke / And it's all those days I prayed and hoped / Yes it's all the love I spread around / Yeah it's all coming back to me now."

Okay, so the album isn't perfect. There are precisely two dead spots (the other being the cynical A Day In The Life Of America). But let's face it, that's not a bad success rate at all, especially for a blind sexagenarian. And considering how vibrant, timeless and singable the rest of the album is, I'm hoping it doesn't take 12 years for the next one.

Grade: A-
Fave Song: It's All Coming Back To Me Now