February 17, 2010
The one constant in every established artist's oeuvre is the bad album, the one that's reviled by both fans and critics. Those unlovable albums are the ones this feature, Rock Bottom, is concerned with.

Here's how it works: I've consulted two main sources, The All Music Guide (for the critical point-of-view) and Amazon.com (for the fan perspective*). The album with the lowest combined rating from both sources is the one I'll consider the worst. I may not always agree with the choice, and my reviews will reflect that. If that's the case, I'll offer a considered alternative. Finally, there are some limits. The following types of albums don't count: 1) b-sides or remix compilations, 2) live albums, 3) albums recorded when the band was missing a vital member, and 4) forays into a different genres (i.e. classical).

* * *
And so we've reached Al's worst album. If you've been following me on my journey through his catalog, it's probably not a surprise. Things have taken a downward turn in his last few albums (Alapalooza, Bad Hair Day, and Running With Scissors). I guess I'm not alone. According to my research Al's three worst albums are Alapalooza, Bad Hair Day, and Poodle Hat. The All Music Guide gives all three of them 2 star ratings (Running With Scissors got 2.5). Amazon.com reviewers were kinder, giving all three contenders 4.5 star averages. Despite that, 2003's Poodle Hat takes the cake, barely, with the highest percentage of one and two star ratings. 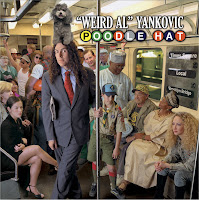 All Music Guide's Stephen Thomas Erlewine offers an uncharacteristically in-depth analysis of Poodle Hat's (and Yankovic's) faults. He feels that, "Al's sensibility has been...thoroughly assimilated by mass culture" and says that this has led to predictability. He also writes that on most of the songs Al "seems removed from the culture he's commenting upon" and that this makes him seem "old and out of step."

Amazon.com reviewers were no kinder. Allen Slea picks up on the exact condundrum I myself have been wrestling with on these later albums, namely the idea of a 44 year-old (at the time, now he's 50) with a 12 year-old sense of humor: "Who is Al trying to appeal to anyway?" he asks. "Does he expect kids to know Piano Man, or be familiar with Frank Zappa or Bob Dylan? Does he expect adults to laugh at junior high stuff like Party at the Leper Colony?" The former question is less disturbing to me than the latter. Other reviewers, also like me, find themselves tiring of Al's songwriting formula. Fred7890 has a long list of complaints, including a complaint about lists: "Second, enough with all the 'list' songs. One per album is enough." AshleyMorgan17 adds that, "All he can do is list things and put it to someone else's music. See, Banana, Detroit, marmoset, rubber ball, toilet, I can list things too. Not funny."

Now, on to my review, in the same format I've done my previous "Weird Al" reviews:

Parodies
The parodies on Poodle Hat are mostly tired and uninspired. Here we have Couch Potato, originating in Eminem Lose Yourself. Guess what? It's about watching TV. Al says nothing here that he didn't already say in Cable TV or Syndicated Incorporated, he just updates the shows and networks. A Complicated Song is a parody of Avril Lavigne's Complicated . In it, the narrator eats too much pizza and gets constipated, finds out his girlfriend is also his cousin, and then gets decapitated. So yep, poop, incest, and violence. Al's song is only clever in its use of multiple 4 syllable words that end in -ed. An Ode to A Superhero is the latest in Al's series of film plots put to music. This time it's Spider-Man to the tune of Billy Joel's Piano Man, and like the others in the series (Jurassic Park, The Saga Begins), it's tiresome.

Trash Day, a parody of Nelly's Hot In Herrre, illuminates a new problem for Al. The song he's parodying is actually funnier than the parody. Nelly's tune was full of intentionally funny moments like the "Girl, I think my butt's gettin' big" and "I got a pole in the basement" bits. Al's is just a list of garbage, which Shel Silverstein did better in his poem Sarah Cynthia Sylvia Stout.

The only bright spot in the parody front is eBay, a take on one of the best pop songs ever written, Backstreet Boys' I Want It That Way. This song is so good, you could put any lyrics to it and it'd be enjoyable (the nonsensical lyrics of the original prove that). Al's take is a Crazy List song of things the narrator got on eBay (an Alf alarm clock, vintage tube socks, a Kleenex used by Dr.Dre, etc.).

Style Parodies
Hardware Store, a fleet tune that uses power tool noises for rhythm is the best of the style parodies. The narrator is excited about the opening of a hardware store, and then he lists items that he'd like to buy. Despite the somewhat boring subject matter, musically it's one of the most memorable songs on the album, a throwback to earlier, better, Al originals. As a bonus, it has no direct musical lineage, though the harmonies on the chorus are vaguely Queen-like. This is comforting after learning how many of Al's originals have actually been uncredited parodies.

Bob is another gem. It's a homage to Dylan, a harmonica-driven rave up full of palindromic lyrics like "rats live on no evil star" and "may a moody baby doom a yam." Of course the joke is that there isn't much difference between the nonsense phases and real Dylan lyrics.

But not all is well. The pick-up-line-laden Wanna B Ur Lover revisits the problem of Trash Day. See, it's done in the style of Beck on his Midnite Vultures album, which itself was a tongue-in-cheek homage to James Brown and Prince. So the original was already funny, and thus a parody was unnecessary. It'd be like someone making a parody of Airplane! At six minutes plus, it's also way too long.

Why Does This Always Happen To Me is in the same category for the same reason. It's done in Ben Folds' style, and Folds himself is no slouch when it comes to writing funny songs (see Uncle Walter, Song For the Dumped, Your Redneck Past, Bitch Went Nutz, etc.). Why Does This Always Happen To Me is a tale of a self-absorbed man whose minor setbacks bother him more than major tragedies. This is also the second song on the album to feature decapitation as a major plot point. The only plus here is that Folds himself adds a great piano solo, and that Al returned the favor by providing back-up vocals on Folds' excellent Time (from 2005's Songs For Silverman).

Finally, there's Genius In France, a multi-part tribute to Frank Zappa. Musically, it's somewhat interesting, running through several different styles. Lyrically, it's the story of a guy whose a complete loser but is revered in France. Is this supposed to be an insult to Jerry Lewis, France, or both? At any rate, count on Al to make broad generalizations about a culture that isn't his own. Like Running With Scissors' Albuquerque this song is too long (nearly 9 minutes) to truly be effective, especially since we all got the joke in the first minute.

Polka Medley
Several reviewers (including Erlewine) pointed out that the title of Angry White Boy Polka is inaccurate, lumping the new garage band movement in with the rap-rock revolution. I don't have so much of an issue with that myself. Here are the song's Al polkafies: Last Resort (Papa Roach), Chop Suey (System of a Down), Get Free (The Vines), Hate To Say I Told You So (The Hives), Fell In Love With A Girl (The White Stripes), Last Nite (The Strokes), Down With the Sickness (Disturbed), Renegades of Funk (Rage Against the Machine), My Way (Limp Bizkit), Outside (Staind) Bawitaba (Kid Rock), Youth of the Nation (P.O.D.), The Real Slim Shady (Eminem). This tune is worth noting for the awesome doo-wop style on Last Nite and the fact that it's the only polka medley Al has done where I didn't know most of the songs.

What The?!
Blues tune Party at the Leper Colony is juvenile. It's full of bad puns ("another pretty lady got her eye on me", "don't you give me no lip") about the titular event. The less said about it, the better.

Conclusion
So, we have an over-reliance on Crazy List songs (a whopping 6 of them), recycled themes, less funny versions of already funny things, and base humor. It sure sounds like a Rock Bottom to me, so I don't dispute the fan's and critic's choice. However, if I'm being completely fair, I have to say that for my money Poodle Hat is actually a slightly better album than Bad Hair Day.