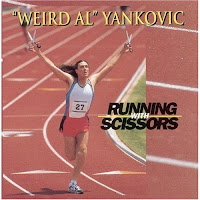 When "Weird Al" Yankovic's first album came out I was six years old. When Running With Scissors came out, I had just graduated college. Though I had outgrown Al's sense of humor by this time (detailed in my review of Bad Hair Day), I didn't really know that then.

So was ignorance bliss? No, not really. I found some minor pleasure in the album, but mostly Running With Scissors sat on the shelf, and with good reason. Though better than Bad Hair Day, it's not a good album.

Once again, I'm aware that I bring a jaded adult bias to these later Al albums. Had I been 12 years old in 1999, I probably have been floored by Running With Scissors and played it incessantly. So that's something to consider as you read. However, I think I would have hated the cover art no matter what. It's overly obvious and not very well composed either. And what's with that band of track running along the right third of the cover? What's the purpose of that? I vote this for Al's worst cover art, hands down.

Parodies
Running With Scissors is the third in as many Al albums to feature a song about a blockbuster movie. It began with Jurassic Park on Alapalooza, continued through Gump on Bad Hair Day, and officially becomes a pattern with The Saga Begins, a parody of Don McLean's classic American Pie. Instead of telling a cryptic history of rock 'n' roll, it's all about Star Wars Episode 1: The Phantom Menace. As usual Al does an impressive job of making the lyrics fit, but the problem is that there's no real commentary or opinion interjected. Instead, it's just a straight-forward recounting of the film's plot. And this movie was BEGGING for some commentary. Perhaps Al feared the wrath of George Lucas and played it safe. Anyway, it's worth noting that this song was released only a month and a half after the film opened! Al claims to have gleaned most of his details from Internet leaks, but he also got to see an advance screening.

Pretty Fly for a Rabbi is a take on The Offspring's hit Pretty Fly for a White Guy. The original was already pretty funny, putting an uncomfortable spotlight on white middle class kids co-opting black culture. Al makes the song much less interesting by making it about the Jewish culture. And as with Amish Paradise on Bad Hair Day, he makes disturbingly broad generalizations about a religion/culture. Sure, he throws in lots of Hebrew and Yiddish words, but the heart of his song is still based on stereotypes, "he'll make you such a deal" and the like. And what's with the "Meka-leka-hi-meka-heinie-ho" reference from Pee-Wee's Playhouse? As far as I know, Jambi was not Jewish. Terrible F.

Things do get slightly better. Jerry Springer and Grapefruit Diet are entertaining tunes, despite the fact that they recycle older ideas. The former is a parody of the Barenaked Ladies' hit One Week. Al makes it about Jerry and his cavalcade of human misery, but it ends up being very lyrically similar to Talk Soup, from Alapalooza. Grapefruit Diet originates in Cherry Poppin' Daddies' hit Zoot Suit Riot from the short-lived swing revival of the late-'90s. Al's version is about a hefty man who tries the titular diet. The jokes could have come straight from Fat, though I admit to getting a laugh out of, "I think I'd sell my soul for a triple patty melt / But I need a boomerang when I put on my belt".

The album's best parody is It's All About the Pentiums which has Puff Daddy's It's All About the Benjamins (the rock-oriented remix) as source material. Here, Al pairs two seemingly incompatible things, rap and tech geeks, with hilarious results. Though the Sarah Michelle Gellar reference dates it a bit, the song is full of great lines: "You're just about as useless as Jpeg's to Helen Keller" or "You said you've had that desktop for a week / throw that junk away it's an antique" or "If I ever meet you I'll control alt delete you."

Style Parodies
My Baby's In Love With Eddie Vedder is a zydeco tune about, well, you get it. Why write a song about Eddie Vedder when Pearl Jam's success had peaked by this point? Well, Al has an ax to grind with Eddie's attitude toward his chosen profession: "What a pain in the butt to have so much success / Spending all his time moping and avoiding the press" and "Now every time I see him, well, he looks so grim / I guess it must really suck to be a rock star like him."It's a deserved roasting, even if is a bit tardy. Also clever: A Ticketmaster reference, and the fact that the jilted narrator ultimately decides to develop his own crush, on Alanis Morissette.

Germs is done in the classic style of Nine Inch Nails, and concerns those not-visible-to-the-naked-eye organisms that wreak havoc in our lives. The song's narrator probably should seek some help, and the song brings to mind germophobe episode of Seinfeld ("I prepared it while I bathed"). Though musically convincing, it doesn't beg for repeat listens.

Your Horoscope For Today is a ska-style list of star sign predictions. Of course they're all wacky: "Taurus! The stars predict you'll wake up do a bunch of stuff and then go back to sleep" and "All Virgos are extremely friendly and intelligent - except for you!" At least the song's bridge addresses the notion that astrology is ultimately dubious.

Finally, your reaction to the country tune Truck Drivin' Song all depends on how funny you find the idea of a transvestite truck driver. Myself, not so much.

Other
Running With Scissors includes the theme song to The Weird Al Show, a Saturday morning kids program that ran on CBS for one season in 1997. I never saw it, but the theme, telling a wacky origin of Al himself, is pretty good as far as TV themes go.

What The?!
In latter days, it seems the artistic success of The Biggest Ball of Twine in Minnesota created in Al a troublesome proclivity for overlong songs. Albuquerque is an 11 1/2 minute stream-of-consciousness talk-sung tune about, well, Albuquerque, I guess. More concerning than its length or lack of real content is that it's almost an exact musical copy of a song called Dick's Automotive by The Rugburns, a short-lived '90s punk group (they also, probably not coincidentally, had a song about Eddie Vedder). This is only the latest in a growing list of songs in the second half of Al's career that are basically parodies without credit given to the original artist (see also: The Biggest Ball of Twine In Minnesota, I Was Only Kidding, When I Was Your Age, Traffic Jam, The Night Santa Went Crazy). I used to think Al was unsung musically because his own non-parody work had such breadth and depth. To find out that many of them are basically plagiarized is disheartening.