February 06, 2010
The one constant in every established artist's oeuvre is the bad album, the one that's reviled by both fans and critics. Those unlovable albums are the ones this feature, Rock Bottom, is concerned with.
Here's how it works: I've consulted two main sources, the AllMusic Guide (for the critical point-of-view) and Amazon.com (for the fan perspective*). The album with the lowest combined rating from both sources is the one I'll consider the worst. I may not always agree with the choice, and my reviews will reflect that. I'll also offer a considered alternative. Finally, there are some limits. The following types of albums don't count: 1) b-sides or remix compilations, 2) live albums, 3) albums recorded when the band was missing a vital member, and 4) forays into a different genres (i.e. classical).

* * *
Rock fans are often divided on which Van Halen incarnation was the best, the original David Lee Roth years or the later Sammy Hagar ones. They are not, however, conflicted about which one was the worst. That'd be former Extreme singer Gary Cherone's short-lived tenure as the band's frontman. The resulting album, Van Halen III, is the band's clear Rock Bottom.

But for our purposes, I think it's better to consider that album an aberration and exempt it under the "missing a vital member" exception. That leaves us to find a true Van Halen Rock Bottom. And since I myself can see the appeal of both incarnations of the band, in this case it seems fairest to declare a Rock Bottom from the Roth years and one from the Hagar years. 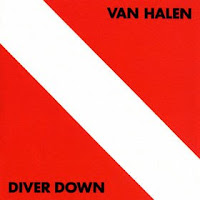 By the ratings 1982's Diver Down is the clear low point of the (first) Roth era. Amazon.com reviewers gave it a paltry 3 1/2 star average rating. The All Music Guide gave it the same rating. Rolling Stone was even harsher, handing out only 2 stars.

But you know something is wrong when the fans on Amazon.com are the most consistent in their rating and appraisal. Most of them took exception with the brevity of the album (29 minutes) and the lack of original material (of its 12 songs, 5 are covers). The sarcastic Misfit Kid writes, "Dancing In The Street"? Are you kidding me?! CRAP!!! Yeah, that really rocks, guys! Good job!!" (You should note that Van Halen's version of the song is actually pretty good, and waaaaay better than the awful Jagger/Bowie take). Gergellor claims, "This is a product clearly released in a hurry, just to satisfy record deals with the record company" (I think I know what he means, but technically, aren't all albums released to satisfy record deals?). Lloyd Benjamin breaks out the thesaurus and the obscure references when he remarks of Roth, "He sounds so unctuous, I expected him to break into Hennie Youngman jokes mid-song."

Things get more confusing when we look closer at our other critical sources. The All Music Guide calls Diver Down "one of Van Halen's best records, one that's a pure joy to hear." This is in spite of it being the lowest-rated Van Halen Roth album in the Guide. At least Parke Puterbaugh of Rolling Stone is consistent in his rating and summation. He says, "There's a little Van Halen in everybody, these guys are fond of saying, but there's too little of them in Diver Down." He also calls the album "consumer fraud" (in addition to the 5 covers, 3 additional tracks are instrumentals, giving us only 4 true Van Halen songs). HOWEVER, the recently-published Rolling Stone Essential Album Guide says that the album "Finds the band back in top form", which would seem to indicate that something before it was worse, wouldn't it? But I digress.

What these contradictions really highlight is rock's eternal struggle between gravitas and frivolity (in fact, Van Halen's entire career has been about trying to balance that dynamic). Is Diver Down an important album? No way. It ends with a cover of Dale Evans' Happy Trails, for goodness sake. When compared to its predecessor, the darker, heavier Fair Warning, it seems like fluff. But as musically significant as Fair Warning may be, it's not a fun listen, nor can you dance to it. Personally, I'll take Diver Down. 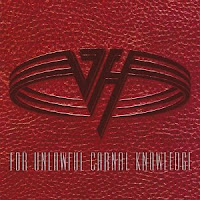 On the Van Hagar front, things were also pretty clear, and surprisingly so. Had you asked me before I did the research I would have guessed that 1995's Balance was the least-loved. It's not my least favorite, but I thought it would be others'. Afterall, the three other Van Hagar albums had all produced bigger hits and sales. But I would have been wrong. It's actually Balance's predecessor, 1991's For Unlawful Carnal Knowledge that gets the dishonors.

The All Music Guide gives F.U.C.K. 2 1/2 stars. The stalwart Stephen Thomas Erlewine compares the record to Sammy's solo work, then writes that it's "undeniable that his limited vocal power had a great deal to do with the obvious nature of most of this music." He then gives feint praise, saying that the band is "tight and professional" and the guitar work "impressive," but that the songwriting is "undistinguished." To me, that's basically a coded way of saying that Hagar is dragging the band down and that Eddie needs a better songwriting partner. (By the way, the site also incorrectly lists For Unlawful Carnal Knowledge as a live album). Rolling Stone comes to a similar conclusion. In a 2 star review, John Milward says "F.U.C.K. is so overstuffed with zigzagging guitars and blustery vocals that it almost forgets to rock." He also thinks that Sammy Hagar is a better singer than Roth, but a more pedestrian a frontman as well.

But what if you actually like Sammy? What will you make of it then? Amazon.com reviewers should be able to shed some light. They gave the album a 4 star average. Wouldn't you know that all of the 1-star reviews are incoherent and/or Hagar haters? The 2-stars are a bit more enlightened. AsTheWorldBurns writes, "Although Hagar's lyrics are more mature than Roth's, they are also much more bland. Eddie seems to have turned in to more of a rhythm guitarist here as his crazy guitar solos and tapping segments are absent here." An anonymous review does my work for me: "This is by far the worst of the discs with Hagar as singer. With the exception of Right Now and Top of the World, the rest of the disc is just plain boring."

And that seems to be the most apt word. For Unlawful Carnal Knowledge is a tiring disc. Songs run an average of 5 minutes each and very little about the album is subtle. The hits, Right Now, Runaround, and Top of the World, are good and helped propel the album to 3X platinum sales and a Grammy for best hard rock performance, but still aren't enough to buoy up the rest of the songs. In this case I think the fans and critics got it right.

*
So that's Van Halen. Three singers, three Rock Bottoms, but still worth hiring to play your birthday party when you get a bunch of reward money for saving Brooke Shields from drowning.