Remake Second Take: We Are the World 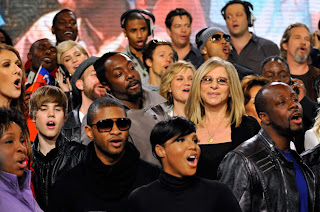 In case you haven't heard, a bunch of singers recently got together to make a new version of We Are the World, that classic schmaltzy superstar balled written by Michael Jackson and Lionel Richie. The impetus was to raise money for disaster relief in Haiti. I have problems with this. Well, not the disaster relief itself, but certainly the remake.

1) My criticism of the original stands: If these multimillionaires really want to help they could donate their time and money rather than recording a song asking lower and middle class people to do the work. Charity singles always seem to me to spring more from an egotistical place rather than a compassionate one.

2) From a creative standpoint, I agree with Jay-Z's recent comments about the remake. He said, "So I appreciate the efforts and everything, but We Are The World is untouchable like Thriller is untouchable." He added that he would have preferred a new song over a remake. Me too.

3) Finally, and most importantly, is the questionable artist selection. The original We Are the World featured a collection of heavyweight hitmakers, with a surprisingly small number of flashes-in-the-pan (sorry Al Jarreau and Kim Carnes). I mean, Ray Charles, Stevie Wonder, Bob Dylan, Michael Jackson, Bruce Springsteen, Billy Joel, Diana Ross, Tina Turner, and Paul Simon all on the same song?!

This may just be me and my advancing years. Maybe the kids of today are swooning over the inclusion of Pink, Akon, Lil' Wayne, Jaime Foxx, Justin Bieber, Josh Groban, Usher, Enrique Iglesias, Fergie, T-Pain, Nicole Scherzinger, Miley Cyrus, and Jennifer Hudson on the new version. But how many of these singers have established their places in pop music history? I'd argue none, with Fergie and Pink coming closest. The exception on the new version is the surprising inclusion of stodgy vets Barbara Streisand, Tony Bennett, and Celine Dion.

Of course, I think I could have done a better job of choosing singers for the project. I have three simple criteria: 1) The artist has to have an established track record and be on his or her way to a permanent spot in pop music history, 2) In keeping with the original, the artist has to be American, and 3) the racial and generational needs to stay the same, so you'll see that I tried to find modern analogues to the 20 singers on the 1985 version (my choice is in bold, with the original in parentheses). Here we go:

I'd also throw Prince, who had been scheduled to participate in the original 1985 version, but missed the session, in Stevie Wonder's place. And I like the idea of having Janet Jackson take Michael's part. The Haiti version does this but has her duet with his '85 vocal instead of letting her take it solo. I'd fix that. Of course some of the verses would have to become raps (I don't want to hear Will Smith or Jay-Z sing), and Bambaataa would have to throw some scratching on there, and Prince needs a lengthy guitar solo.

Even with this talent, the results would probably be pretty awful, but in a really cool way. Just like the original.