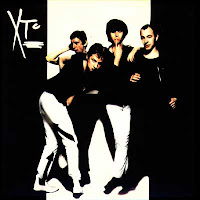 It's somewhat reassuring to know that even the most accomplished people in the world have certain aspects of their past that they'd rather ignore. XTC are a band whose sophistication and vitality cannot be called into question, but did their 1977 debut album indicate that in any way? No.

It's not that the album is bad - it isn't - but compared to their later work it's pale and primitive. It's as if they only had 8 crayons to color with. Later albums like English Settlement (1982), Skylarking (1986), and Nonsuch (1992) were definitely the results of a box of 64.

Still, there are flashes of the brilliance that would fully emerge later. Radios In Motion and This Is Pop, both songs about songs, have a primal thrill: fast tempos, manic performances, punchy harmonies. Statue Of Liberty is a clear standout. It's a catchy mash note to the titular figure, and is filled with clever double entendre (singer/songwriter Andy Partridge's specialty). Check out these lines: "You've been the subject of so many dreams / since I climbed your torso" and "Your love was so big it made New York look small" and "In my fantasy I sail beneath your skirt." Great stuff.

But the rest is damn near useless. There's a curious harmonica-driven cover of Hendrix's All Along The Watchtower. It stretches nearly five minutes and features a psychedelic freakout ending which indicated right away that XTC weren't your garden-variety new wave punk band (granted, that was a damn cool garden). By the way, it's also the only cover to appear on a proper XTC album.

Perhaps the most tell-tale indication of this album's first draft status are bassist Colin Moulding's compositions. On later albums he was responsible for some of the band's most complex, pastoral, and appealing songs. That's NOT the case here. X-Wires, Do Wot You Do, and I'll Set Myself On Fire are all borderline annoying as well as lyrically block-headed. Compare the latter's "Oh strike my head / On a stone Joan / God knows this is yuk / Do it all in unison" to "Everyone's creeping up to the money god / putting tounges where the didn't ought to be / on stepping stones of human hearts and souls / Into the land of nothing for free" from King For A Day. Both lyrics mention gods and stones, but they're light years apart artistically (even if in actuality only 12 regular years).

As they say, you gotta start somewhere.

Anonymous said…
Wow, lacking in sophistication and vitality? In 1978 this was just about the epitome of both, and to me it remains so, easily standing up to comparison with any of their other work. It's a stunning debut, for me one of the greatest of all time. X Wires, Do What You Do. Watchtower, Set Myself on Fire, I'm Bugged, New Town Animal, Spinning Top, Neon Shuffle - "damn near useless"??!! Hardly, they're just a non-stop onslaught of off-kilter genius. A masterpiece.