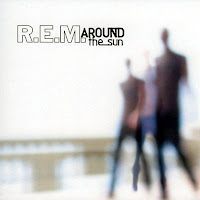 Pre-release reviews can play a large part in how I view an album. I'm usually optimistic about any new effort from an artist I love, and reviews can either feed that optimism or diminish it. A bad review especially can drop the status of a new album to just above that of a Maroon 5 live album. The obsessive part of this is that VERY rarely would I avoid a new record by an artist I like just because of a bad review (or several). And no matter what, I'll usually be hard-headed when I get the album and insist that the critic was full of it.

The story can go two directions from there. One, the critics' complaints actually have merit and will eventually creep into my perceptions of the album. Or, my hard-headedness sticks and I love the album.

I mention all of this because the early words on R.E.M.'s latest effort have not been kind. As I see it, the main grievance is that the band hasn't made Automatic For The People again. This is a little sad to me, considering that album came out 13 years ago! I guess in some eyes, the last four albums have been complete disappointments. So why hasn't the band become completely irrelevant? Why does their record company even still allow them to make CDs?!

Now one could argue the merits of Monster and New Adventures In Hi-Fi (both are close to my heart), but critics mostly focus their rancor on the post-Bill Berry albums, Up and Reveal. They claim the band has lost the ability to make anthemic catchy songs because they don't have a permanent drummer. However, last I checked all the post-Berry albums do have drums on them. Okay, Up (1998) was a languid, electronic-based record, no doubt about it. But it was also sporadically wonderful, with songs like Suspicion, Walk Unafraid, At My Most Beautiful, and Parakeet (the latter two showing that the band's new template is the Beach Boys). 2001's Reveal was more pastoral and organic, consistent but mostly inconsequential. The reviews have Around the Sun following that same trend.

Don't believe the hype! After listening to all three albums in a row, I feel safe declaring that Around the Sun is firmly in the middle of the pack. It's not as good as Up, but it beats Reveal by a few paces. It definitely has has more vitality (the current events-concerned Final Straw and I Wanted To Be Wrong) and immediacy (Leaving New York gets stuck in my head all the time...it's their best single since The Great Beyond, easily) than its predecessor.

No, as an album it's not at the level of Automatic, or Out Of Time. But that's difficult to expect, from any band. What we do have are some great songs: Electron Blue is reminiscent of New Adventures (and, coincidentally, the same color I'm painting my bathroom...Neutron Yellow was too dull), Aftermath and Boy In The Well could both be future singles.

The Outsiders contains the album's most thrilling moment. Guest star Q-Tip (formerly of A Tribe Called Quest) drops the final verse of the song and does a bang-up job. The fact that what could be a horribly contrived or embarrassing moment turns out to be my favorite is a testament to Q-Tip's MC skills. I could have lived without Biz Markie's appearance on Radio Song (from Out Of Time) but this makes me want to hear a whole album of R.E.M. / Q-Tip collabos.

There are a couple of songs the album might have done without, but overall Around the Sun is an effort any open-hearted R.E.M. fan should be pleased with.

Final thought: You know, there are some bands that just seem intent on pushing their fans' limits (paging Wilco and Radiohead) but R.E.M. doesn't fit in that category. So what is it? I truly believe that if they wanted to write Losing My Religion or Man On The Moon again they could, but I think they simply don't want to. I mentioned that more and more they seem to be patterning themselves after the Beach Boys (true on Around the Sun in Aftermath's buoyant harmonies and in the ba-ba-ba coda of the title track), but maybe it's not just musically. Think about it, get a lot of early acclaim and success and then make a series of respectable but ignored albums... in fact, my reissue of the Beach Boys 1977 oddball effort Love You has liner notes by R.E.M.'s own Peter Buck. Hmmm.

Rating: B
Fave Song: The Outsiders