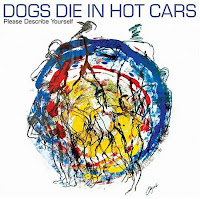 Poor Chomsky. They try their hardest to pattern themselves after early-period XTC, even going so far as to reference White Music lyrics and titles in two of their songs (Herod's Daughter and Animal), and here come Dogs Die In Hot Cars, stealing all the buzz and glory. Admittedly, DDIHC have an advantage. Singer Craig Macintosh's voice is a dead ringer for XTC singer Andy Partridge's. It's uncanny.

The current Neo New Wave movement in music needed this. If Interpol are Joy Division, The Killers are Duran Duran, The Libertines are The Clash, The Yeah Yeah Yeahs are Blondie and TV On The Radio are Genesis, then why not have an XTC?

DDIHC don't seem very shy about the comparison. One of the songs on their excellent debut is called Apples & Oranges, which is the also the title of a 1989 XTC album. (It makes me wish a band would make a whole album of songs with titles named after albums without title tracks). And their songs are not a far cry from XTC's Drums and Wires era, when XTC's music was still somewhat fast and angular but they'd learned to inject real emotion.

Please Describe Yourself was produced by Clive Langer and Alan Winstanley, the pair responsible for many a pop success, including all of Madness' output, They Might Be Giants' Flood album, and Bush's Sixteen Stone. They also produced two consecutive Elvis Costello albums, Punch The Clock (1984) and Goodbye Cruel World (1985). The former is one of his better efforts, and the latter is widely considered to be his worst. So in case you think the producers were brought in on this project to turn crap into gold, realize that they can only guarantee a pop sheen, not good songwriting.

That's not a problem here. The record speeds by without a weak moment. From the obvious singles Godhopping and Lounger (both are quite Madness-centric, with barked lyrics, a fast, piano-driven tempo, and stacked vocals on the choruses) to the clever / affecting Celebrity Sanctum (wherein the narrator compares his girl to his celebrity crushes) this is an exhilirating consequence-free listen.

Like Franz Ferdinand, Dogs Die In Hot Cars are Scottish and have four guys in the band. Unlike Franz Ferdinand they have one woman in the band, have normal haircuts and are accessible and fun. It seems like this time every year I get one pleasant, unexpected musical surprise. This is it.

But I still feel a little bad for Chomsky.

Rating: A-
Fave Song: I Love You 'Cause I Have To