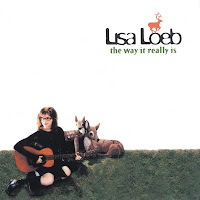 1) The title of this album is odd, seeing as how the opening song on her last album, Cake And Pie, had the exact same name. For me, it harkens back to the Doors and Led Zeppelin. The Doors' third album was called Waiting For The Sun, but the actual song appeared on their fifth album, Morrison Hotel. Houses Of The Holy was Led Zeppelin's fifth album, but the song with the same title was on Physical Graffiti, two albums later. In my limited knowledge, Ms.Loeb is the first artist to name a record of all new material after a song on a previous album.

2) I love those little stickers record companies put on the front of CDs to sell them. If they aren't already affixed to the actual CD case, I'll try to take them off the plastic and put them there. Usually these stickers say things like "the new album from..." or "features the hit singles..." or they have quotes from reviews. The Way It Really Is contains a non-attributed snippet that describes the album as "a premium blend of power pop and intimate acoustic music." This is noteworthy for two reasons. One, I never considered Lisa Loeb to be power pop before I read that, but now I can totally see it, and two, the description is right on.

A lot of times you'll get a new album and you're hooked immediately by the catchy stuff and the slower songs either become skippable filler, or tunes that eventually make their case. So it's a risky move to release an album so clearly divided (and obviously proud of it), but it pays off for Lisa.

There are eleven songs; five would fit under the power pop category and five would fit on the acoustic side (the bluesy opener, Window Shopping, doesn't really belong in either). I'll start by talking about the latter. Try is, in my opinion, the best of the five. It is buoyed up by strong harmony and a breathy chorus and if tackled by someone more ambitious and less wordy (such as Faith Hill) might have become an epic power ballad. As it is, it's often the song I find myself singing after I've listened to the album all the way through. Would You Wander features prominent background vocals from Indigo Gal Emily Sailers. The Accident is a well-crafted song that'd be declared a masterpiece if it were by Paul Simon. Lisa's girlish voice is appealing, but has a way of coming off inconsequential. However, her dexterous guitar work on the song is impressive. Hand-Me-Downs is intriguing because of how it might have been inspired. It's told from the point of view of a woman who's sick of her man's self-involvement and drug habits (mentions of disappearing money, "powder's in the kitchen"). Is it about ex-beau Dweezil Zappa?

The power pop songs are lighter lyrically, and provide a good balance. These are the songs you sing along to in the car. I Control The Sun is full of harmony, catchy guitar licks and Sgt.Pepper-style keyboards. Now I Understand features fantastic Beatley background vocals from power pop poster boy Jason Faulkner. Fools Like Me, the first single, comes dangerously close to sporting that programmed Matrix sound. It could be a huge hit for Hilary, Avril or Ashlee, but Lisa deserves it. She's been in the game ten years making pop tunes (Dr.Dre paraphrase there). Probably is probably my favorite of these songs, mostly because it (intentionally or not) pokes fun at the murkiness of our English language: "I probably love you / Grass is probably green / Sky is probably blue / I'd probably do anything for you."

Overall, it's a good showing from Lisa, a woman you can always count on to turn in a quality effort. This isn't an album for driving in the car, but it's more classic in the sense that you'll put it on at home and enjoy it as a whole experience. That's the way it used to be, and it's coming clear that the girl with the glasses has a strong sense of pop history.