The Shins - "Gone For Good" 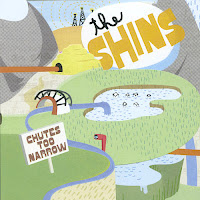 I keep pulling The Shins' album Chutes Too Narrow out and listening, and that's strange because my feelings about it have been so ambivalent. I think the reasons I keep getting drawn back in are: 1) the outstanding package design, and 2) other people like them so much (critics, friends, Natalie Portman in Garden State). For awhile I was afraid the album would become one of those things I enjoy in theory more than in actuality, like Woody Allen movies and the Notorious B.I.G. But it's growing on me, and this song is one of the main reasons.

The ten songs on Chutes Too Narrow are varied in style but all share a dense lyrical barrage that takes time and will to penetrate. Gone For Good is the odd-man-out in the album because it is this short of being a straightforward country song. The pedal steel rings out loud and clear, and the lyrics, while still clever and metaphoric, are not a puzzle. It's a break-up song, plain and simple.

In a creative writing class I took in college the professor stressed that trouble is always more interesting than contentment. Sadly, this is completely true; when I think of my favorite songs they're ones about broken hearts. Gone For Good is a doozy, but also a convention-breaker. Instead of lamenting his girl leaving him, the narrator of the song is actually the one doing the dumping. He's gone along with this relationship and then reveals: "Until this turn in my head / I let you stay and you paid no rent / I spent 12 long months on the lam / that's enough sitting on the fence / for the fear of breaking dams."

The "turn" he's singing about is his decision that they can't be together anymore. Thematically, it's like an update of Elton John's Someone Saved My Life Tonight, especially when the lyric gives you the idea that marriage is involved: "I've got to leave here my girl /and get on with my lonely life / just lay the ring on the rail / for the wheels to nullify." The difference is, in Elton's song we know why he was breaking off his engagement to a woman, even if he didn't. In Gone For Good's chorus the narrator tells us, "I find a fatal flaw / in the logic of love / and go out of my head." What that fatal flaw is, we just don't know.

But what I love most about this song is the fact that it's a country song on an album that countless hipsters will pride themselves on owning. And we know what hipsters love to say, don't we? "I like every kind of music but country." (Spin writer Chuck Klosterman wrote that people who say this are "the most wretched people in the world.") Maybe they'll open their minds a bit.

Album: Chutes Too Narrow (2003)
Fave Moment: Near the end, the song seems to be going into the chorus again, but instead goes into a completely different set of lyrics sung to the chorus melody. Ingenious!