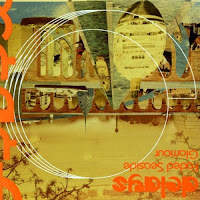 Lately I've had two trains of thought about music and right now they seem to be converging on to the same track.

They are whys and whats: 1) Why do we continue to seek out new artists and sounds, and 2) What is the purpose of writing about music?

On the latter I'm prompted simply by the existence of this Blog. I enjoy writing CD reviews, but sometimes find my musical vocabulary so limited as to be frustrating. I take comfort in the fact that I'm not alone. Just a glance through the latest issue of Spin reveals that the prevailing method of describing an artist is comparing them to another artist. You know: This songwriter has the lyrical dexterity of early Dylan combined with the gloomy soundscapes of the Cure, or that band takes the pomposity of Tattoo You-era Stones and adds the sensitivity of Dashboard Confessional. Or: It's like Trout Mask Replica as recorded by Sweetheart Of The Rodeo-era Byrds.

At some point descriptions like that just make me glaze over, especially when I'm only vaguely familiar with the reference points themselves. But as I try to write about music myself, I find that making comparisons is the easiest way to give a reader and idea of what to expect. Writing about the actual instruments and feelings takes much more effort and thought. So I've definitely been guilty of this myself.

Okay, moving on. Stick with me here; I think this will all come together.

My other contemplation concerned why we continually seek out new artists. A friend once told me that he would soon be to the point that he didn't have to buy any new CDs. He said he would have all the back catalog stuff and then would only have to buy the occasional new Radiohead or Bob Dylan album. It's a laughable notion to any true music junkie, but also a tantalizing one. Could it actually happen?

Sometimes I wish it could. Trying to discover and connect with new artists can be a taxing process, both on the ears and the wallet. For every great discovery there're two or three that just sit on the shelf and gather dust. It often seems to me that the best discoveries happen by accident, through a friend or a chance encounter. But where does that leave me when I have that urge for a new sound and don't want to wait?

So I read reviews carefully (in magazines and online), check out samples, etc. but the mistakes still happen. And really, what am I looking for? Is a new band that sounds like (insert favorite band) that much better than just listening to (insert album by favorite band)? Sadly, the answer I've come to is that my love for music is really just an extension of an obsessive personality. And you can only be obsessed with one thing for so long before you need a replacement. So I'm always looking for that new thrill.

And really, isn't saying that we shouldn't seek out new artists the equivalent of saying that new books and movies don't need to be made, because there are already so many good ones to experience?

Okay, so here's where we converge.

Ostensibly I realize that the purpose of writing about music is to tell a person if they should buy something or not. It sounds petty when put that simply, but it's really just another way to make the process of seeking out new music a bit less of a crapshoot. But I have to ask myself, is that why I write about music?

I've decided my own writing should be about one thing: my personal experience with the music. If I'm passionate about my subject, and that comes through in my words, then a by-product might be someone seeks out a certain artist or album. But I don't want that to be the goal. The goal is to get across the feelings a certain song or album creates for me.

As for this tendency to compare artists, I'm going to start right now and be one small voice that doesn't do it, as strong as the temptation may be. Instead, I'm going to keep it personal, and seek out new ways to express in words what I hear. At the risk of becoming too formulaic, I'm instituting a new format. Every review I write will include these three things:

1) My personal reaction to the music (lyrics, sounds, feelings)
2) A bio of the artist, and
3) A discussion of the artwork (I know this one sounds strange, but I can't tell you how often the artwork influences my reaction to an album...when the Foo Fighters put out One By One with a black or white cover I chose the white because I wanted it to feel like a more optimistic listen).

So, now on to this long delayed review:

I discovered The Delays via a (comparison-free) mini-review in Spin. I checked them out online and liked what I heard. The band hails from Southampton in the U.K. and features brothers Aaron and Greg Gilbert on vocals/guitar/keys, drummer Rowly, and Colin Fox on bass. They formed in the late-nineties, supposedly meeting because of a shared admiration for the song Alphabet Street by Prince. (This tidbit is sure to endear them to a certain type of person, namely me). They paid their dues playing in clubs, did some demos, got noticed and scored a couple of Top 40 hits in their homeland. Now they're trying to translate over here and become, in Greg Gilbert's words, "the perfect pop band."

There's a reason this particular album prompted the avalanche of thoughts above. Upon the very first listen, the record sounded so damn familiar. And though it's soooo close, I can't pin down exactly who or what they evoke, or even what it is about them (the singer's voice? the guitar tones?) that is so evocative. At some point it's not even worth wasting the mental energy, and I might as well enjoy the songs for what they are, knowing one day it'll come to me (like the time in college that I finally realized that the guitar part in Wild Wild Life by Talking Heads is a dead ringer for the one in Shattered by Rolling Stones).

And enjoy them I do! The first four songs are a killer combo. I think there are three general places that good music hits you, the brain, the gut and the ass. This album is definitely the middle one. It's not dance music, though most of the songs have a definite spring in their step. It's not cerebral either; the lyrics are elliptical (they're not even printed in the booklet). Of course once in awhile a line will catch, such as "we'll go where there's no snow" from Wanderlust; it's an obviously relatable sentiment for a Minnesota resident.

No, the prevailing idea of this album is to move you emotionally.

This is accomplished with dreamy, chiming, open guitars and flourishes of piano, soft beds of "oooh" and "aaah" background vocals and Gilbert's oh-so-familiar singing voice (when he draws out the title line in Bedroom Scene I swear I've heard it before). Like the best charmers it doesn't matter so much what they're saying, but how they're saying it.

As an album it's a good listen. Most records that start off so strong don't maintain it, but after a short ballad in the 5 spot, the album picks back up for numbers 6 through 8, peaking with the jubilant Hey Girl. The only misstep is putting the two most ponderous tracks, There's Water Here and Satellites Lost right together. It's the equivalent of a concert where the band has just torn through a dizzying number of great tunes and then begins to indulge in a jam session so people can go to the bathroom and freshen their drinks without missing anything important. It's forgivable, mostly because the songs are short and inoffensive.

The artwork looks like a collage of old postcard images, mostly buildings and boats. It's interesting to look at and fits with the album's title (which seems apropos of nothing in the songs). The band has their own logo already, which is very important for any self-respecting Britpop group. Orange is the dominant color, and it is nice and optimistic and suits the album's mood very well.

Overall, this is a great get-lost-in-your-thoughts album and could also fall into the pleasant-background-occasional-foreground music. If you heard it in a store, you'd think: This sounds great. Just don't worry too much about who it sounds like.