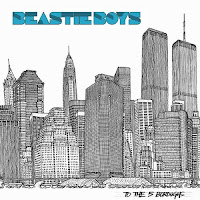 I love the Beastie Boys, but I have to admit that I'm not the biggest fan of their albums. I know that sounds strange, but aside from Paul's Boutique none of their records is a completely satisfying listening experience for me.

The monster debut, Licensed To Ill, has never been a favorite; it's too crass and bludgeoning. Check Your Head and Ill Communication are full of great songs, but are ultimately weighed down by the indulgent jazz and punk experiments. Hello Nasty stays strong for the entire first half, but the quality drops off drastically over the course of 22 tracks.

The good news about To The 5 Boroughs is that it avoids falling into the same category as these four. As an album it's a complete work, like Paul's Boutique. There are 15 tracks, and the vast majority of them are, to borrow Adrock's phrase, "terse and concise." No indulgence. Also like PB, the album is full of New York references, and both feature New York cover art. To The 5 Boroughs has an intricate pen drawing of the NY city skyline that stretches out a good three feet when you unfold the whole case. It's quite impressive.

But what does the record sound like? Adrock, Mike D. and MCA produced it themselves, which turns out to have been a great idea. No Rick Rubin, Dust Brothers, DJ Hurricane, Keyboard Money Mark, Mario Caldato, or Mixmaster Mike. The Boys had enough confidence to put themselves clearly in the forefront. Every track has samples, but this isn't a kitchen sink approach. It's all very efficient, using interesting hooks and beats (and robots too) but putting the focus squarely on the three voices.

Two things strike me when it comes to listening to the Beastie Boys rhyme. One is, of course, what they say. The other is how they say it.

On the latter, sometimes things are funny not so much because of what's said, but how they're said. There are plenty of moments like that on this disc:

1) On Ch-Check It Out Adrock compares himself to Miss Piggy and all three answer with a dead-on impression of the porcine muppet: "Who, moi?"
2) Mike D brags about buying his grandma a "brand new broach" in Rhyme The Rhyme Well he rolls the 'r' in broach.
3) Triple Trouble finds the Boys copping British accents to claim they are "mesmerizing, tantalizing, captivating, and devastating." British accents are not automatically funny, but if you place them in a rap song and pretend you have a stuffy nose, that's comedy gold.

Of course the Beasties have always been masters of the funny/weird simile or turn of phrase. They spout off the kind of lines you can repeat to friends in the know and always get a laugh, like a rap version of Caddyshack. (My all time Beastie fave is: "My man MCA's got a beard like a billy goat" from Hey Ladies. In case you're wondering, my fave Caddyshack line is: "Pond would be good for you.") This new album is no exception and adds some great ones to the pantheon:

1) "'Cause I've got more rhymes than Carl Sagan's got turtlenecks." (from Hey Fuck You)
2) "Try to smooth it out like Levert" (from Right Right Now Now)
3) "I'll steal your keys and then I'll check your mail." (from Oh Word?)
4) "Whether in the high rise where you live like Rhoda, or in the shack and you live like Yoda." (from All Life Styles)

Finally, I'd be remiss if I didn't mention the political stance the Boys take on this album. A lot has been made of their efforts to speak out against GW. For one, they took some critical flak for being too obvious and earnest on their internet release In A World Gone Mad. No one congratulated them for speaking out in their music when so many other artists won't.

Critics are also making a big deal of their Bush disses on this record. In truth the references are just peppered lightly throughout. Only Time To Build tackles the issue full on, and it handles it well. The overall message is one of peace and tolerance, but in the last couple of verses they really take it to the current administration: "I think it's due time that we inspect how they get their information and the facts are checked / Another press conference someone's talking out their neck."

But the best moment of the song is the end, when they bring it down to a human level for their own personal press conference with Bush: "What the real deal, why you can't connect? / Why you hating people that you never met? / Didn't your mama teach you show some respect? / Why not open your mind for a sec?"

Of course this is nothing that isn't being said more eloquently (and without rhyme scheme) by op-ed columnists everywhere, but the point is that maybe it'll get through to more people when presented in a different format. Kudos to the Beasties for giving it a shot. I think the reason they've received flak is because critics can't get past the fact that these are the same three guys who, in 1986, bragged "I can drink a quart of Monkey and still stand still" on Time To Get Ill. As a matter of fact, that song title sounds an awful lot like Time To Build.

With that "coincidence" the Beasties are really saying something else: It's time to grow up without losing your sense of humor, or your edge. And they've made a complete record to demonstrate it.