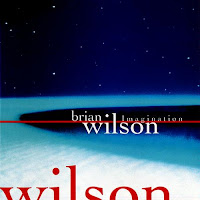 Though the Beach Boys are my very favorite group, I've consciously avoided Brian Wilson's solo records. There are various reasons for this, but the main one is a thoroughly depressing version of 'Til I Die that appears on the documentary soundtrack I Just Wasn't Made For These Times. It's croaking and raw and has always confirmed for me how hard it is to reclaim lost genius.

This weekend I came across both of Brian's solo studio albums at a garage sale and decided that low prices go well with low expectations. Given that, the first notes of this album this album shocked me. Your Imagination, the opener, has that classic feeling: insane melody, swooning harmony, and intricate arrangements. When Brian sings "I take a trip through the past / When summer's way out of reach" it might as well be a mission statement for the album. There's a conscious effort here to recreate the past, specifically Brian's musical past.

And though Your Imagination is the most intoxicating song on the album, the rest of the tracks aren't a let down. Nearly every song sounds like it could have been on a classic Beach Boys album (a couple of them were in fact, Keep An Eye On Summer and Let Him Run Wild are both remakes...it may be blasphemy to say so, but the latter even tops the original, sounding richer and punchier).

A couple of the songs on this album might even have made it to the A-Side of a 45 back in the day, with a cool orange and yellow swirl on the label: She Says That She Needs Me has a jaw-dropping melodic shift in the very first verse, for goodness sake! And Brian's falsetto is still in fine shape despite years of abuse. Cry is another contender, and with its bluesey guitar solo it would have defintiely been a stylistic departure from the classic Beach Boys sound, though not an unwelcome one. It's a beautiful song, with lyrics that are vintage teen romance drama.

Only two songs recall the dark edges of Brian's contributions to the Boys' '70s albums. Lay Down Burden has shades of the afforementioned 'Til I Die, but the lyrics are decidedly less ghoulish. The album closer, Happy Days, begins with a dissonance and amelody that are especially jarring given the everything-in-its-right-place sound of the rest of the songs. It reminds me of Vegatables from Smiley Smile. But that sonic chaos is part of the point of the song; it accompanies lyrics that refer to Brian's unhappy days, before falling into stride and opening up for a typically sunny melody on a chorus that declares "happy days are here again."

And there's no further proof of that for Brian than this album itself.

Rating: A
Fave Song: Your Imagination